The good news after running the marathon a couple of weeks ago was that on the way home I swung by Silver Cycles, to pick up the new Kestrel Airfoil Pro SL triathlon bike. Being on Team Kestrel for 2010 means that I get one sweet triathlon bike to race on.......

The last week or so I have been tweaking the position and by now have about 200miles on it. I can tell you that first impressions are great, it's stiff, fast and really responds when you lay the power down.

Fortunately I also have some great sponsors in FFWD Wheels, ISM Saddles and Beaker Concepts that make the race rig a complete bad ass. For 2010 I'm rocking the FFWD carbon disc wheel and a set of F9R's......these things are NICE! I rode the F9R's for the first time last night and was rolling along like a rockstar, I can't wait to race on them.

From ISM I have the Adamo Road, , which has gained a massive following in the triathlon world and is hitting the road racing scene. Due to the frame of the Airfoil Pro, I have the carbon Hydrotail from Beaker Concepts, which is one of the most aero hydration systems on the market.

So here are the pic's........I'll post ones out in the sunshine after this weekend!....the background of the garage door doesn't do the bike justice :-) 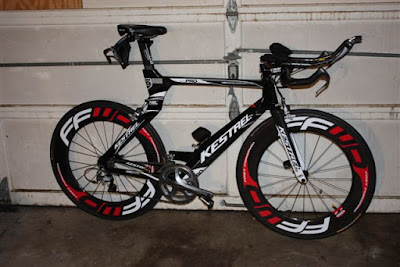 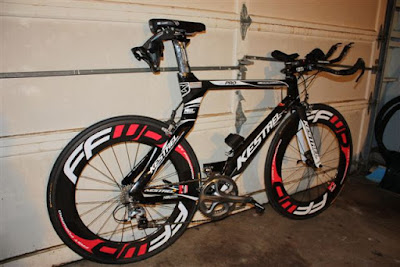 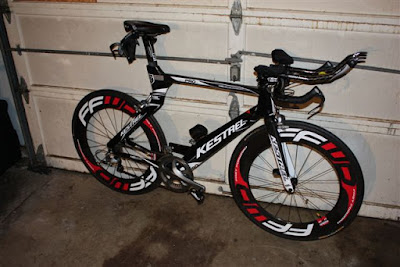 Any tips for IM Lake Placid? Racing there this year and gunning for Kona!

The new 4000 has been delayed slightly in production. The tri race season is upon us and I need to get some miles on the bike before racing. In no way am I dissappointed.....the Airfoil is sick!