The goal for this race was to try and get one of the coveted qualifying slots for the Ironman World Championships in Kona, Hawaii....the holy grail of long distance triathlon racing! As I had previously stated, to get one of the slots I would need the race of my life, either that or hope for a roll-down.

The weather was almost perfect for fast racing, there was cloud cover, a slight breeze and no blazing heat. The 30-34 age group swim wave was one of the last to start and was an hour after the pro's had already started. By the time that we got onto the course about 90% of the racers were already out there. 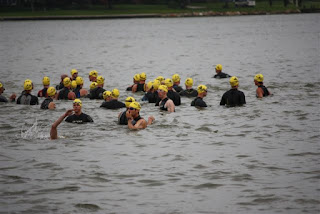 The swim was slightly choppier than I expected. The swim is always relatively choppy in the Choptank River, but with only a slight breeze I though it would have been calm. I felt good in the swim, not super fast as the swim is the weakest of the three elements, but I came out in 24th place in age group. I really need to try and work hard on my swim training as I generally lose a couple of minutes to the rest of the top guys. 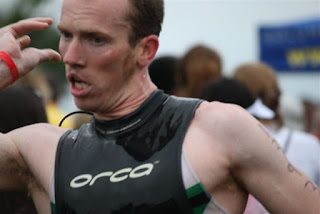 From the off I felt strong on the bike and was quickly at race pace and trying to keep it powerful and efficient. Having been out on the course the last few weeks and all day on Saturday, I knew that the first half of the bike would be a tail or cross wind and so decided to make hay while the going was good. At around mile 8, I had a minute or so of panic as it felt like the front tire was going soft....fortunately it wasn't and so must have been the pavement surface or something like that. The bike continued to go well and a few guys from the 30-34 age group gradually caught me and we had a group of us together for quite a period of time (5-6 of us). Some of the guys were blatantly drafting while the rest of us were working together (legally) and trying to push the pace. It wasn't until the referee's came by at around mile 35 that a couple of the guys got drafting penalties (fortunately they were the ones drafting the majority of the time) and then the group split for good. The headwind started to kick in at this point and I rolled off the front of the few remaining guys to try and get some separation. It was at this point that you noticed that the slight breeze at the start had kicked up a few notches around the bike course and the going wasn't so easy now!

After 2hr 22mins on the bike at 23.7MPH (12th in AG) I rolled into T2 and exited for the run in 14th place. The run is an out and back and so I knew that at some point I would be able to find out my position, or at least approximate it. This is when it really becomes a mental game. I knew that if I had had a good bike split then the real strong cyclists would have had equally as good days and it would be up to me to run everyone down. I really need to drop a few minutes off the bike but keep my run speed! 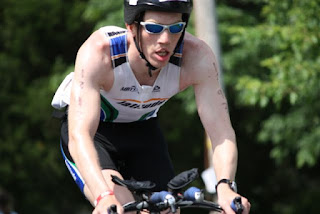 So the run started off real well at 6min/miles and the legs were feeling good. That's always a positive thing as you never get quicker, you only gradually get slower on the run! By this time in the race the sun had come out and was beginning to make you bake....water, gatorade and ice were my choices at the aid station with the ice going straight down the top. Coming to the turnaround I had calculated that I was in approximately 9th place and was 12mins off the leader...the goal continued to be to get as high as possible for any slots that might roll down! Over the remaining half of the run I settled into a solid 6:30min/mile pace and tried to focus on any potential guys from my age group that were up ahead. It was difficult to make out those guys as the course was pretty full at this point and people get crafty about showing the age on your calf! (i.e., rubbing it off or smudging it etc) 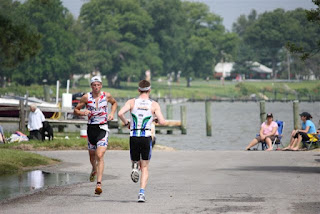 Coming into the finish it was cool to hear Sarah and Lisa cheering as they had been all day but I knew the Kona slots were out of my hands....no top two, so I would have to hope that people would turn it down! I placed the 5th fastest run at 1 hour 25mins and a final time of 4hrs 20mins 53secs....a PB for the Eagleman course. 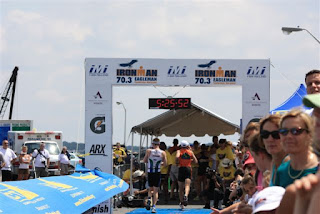 The final results went up and I was in 7th place in age group (although the first two placed overall in the amateur so I did get a 5th place award) and 33rd overall (out of 1600!). The World Championship slots would be given out at 1:30pm and so it was about an hour to hang around and wait....and wait......

After going through the younger age groups we finally got to 30-34 age group and the first two guys quickly said no to the slots (both Kona and Clearwater)....their was a glimmer of hope! From there it all went a bit awry, one guy I think he was 3rd took a slot but they didn't announce what slot he was taking....still a chance. 4th placed guy was a no-show and so was 5th place. We still didn't know if the 3rd place had taken a Kona slot....6th place was called and took a slot, what was it, tell me god damn it, did they not know that people wanted to know! The 6th place guy sat down near us to fill out his forms and we saw it was a Hawaii form.....one had definitely gone! We needed to find out what 3rd was taking!

In a matter of seconds the dream at Eagleman was shattered, Sarah asked the 6th guy what Kona slot he had taken.....2nd slot! NNNNNOOOOOOOOO! And then my name was called, did I want a Clearwater slot at 70.3M Worlds, I double checked that Kona had all gone, which they had, and declined my Clearwater slot.

I had missed out on Kona by a mere 31 seconds....at my running pace I was 415 feet away from the Ironman World Championships on the Big Island. That was my day at Eagleman 2009 and that 31 seconds will stick with me for a long time :-(

Onwards to Ironman Louisville at the end of August where there are tentatively four slots for Kona!
Posted by Iain Banks at Tuesday, June 16, 2009

Amazing Iain, you should still be VERY proud of yourself

How do you work together legally in a no draft race?

The Drafting Rule is defined as "the maintenance of a static position to the rear (within three bike lengths) or to the side (within 6 feet) of another cyclist or vehicle." So you can legally be behind someone (>3 bike lengths), overtake and then essentially the group keeps leapfrogging each other. Not drafting but still working together.