This race report is a bit late, coming almost a week after the race. Perhaps it has taken me that long to collect my thoughts as I was hurting big time after the race.


The short story is that I went out fast, based on what I needed to do to hit a new PB, and then hit the massive wall someone had placed at mile 20. Up until that point I was on course for a PB but those last 6 miles were gruesome and I crossed the line in 18th at 2hr 46mins 51secs. A very respectable time and placing, but I was outside my PB by 5mins. Sometimes you have to gamble everything to hit the jackpot, this time I lost...........but maybe next time :-)


Despite the hurt of the race I have to say that I did enjoy it and often it is those races where you have to overcome barriers that are the most satisfying. Yeah the last 10km was painful and seemingly very slow, but at least I sucked it up and finished. I didn't give in to the temptation to bag it or to walk, even up the hills at mile 23 and 24 which really give this course a great sting in the tail.


The fun started early in the morning with a 4:30am wake-up call, out the door at 5:00am and sitting in the car park at 5:30am. At the time we wondered why we got there so early as the start was 7:00am and the RFK car park was empty....at least we were close to the start line. Over the next hour however, we then realised what a great idea it had been to get there early. I'm sure there were plenty of runners sweating profusely as the queue and traffic around the stadium grew larger and more congested. As we slowly made our way to start line at 6:45am there were still people parking and queuing to park. Even as the gun went and we headed down the first mile there were people heading up to the start line. The funny thing was that Sarah then headed off to the Metro so she could get around the course and runners were getting off the Metro to start at 7:10am.......

I won't bore you with minute by minute details of the race, but one of the funniest things happened at precisely 6:59am, yup, one minute before the start. There I was positioned in the first row directly behind the elite runners and a rather rotund guy (in running gear) barges through and taps the elite woman in front of me on the shoulder. She turns around wondering what the heck is going on as they were 60secs away from start time, and the guy motions her with his camera and can she take a picture of him and his mate at the start line.......not surprisingly she gives him such a look of disdain and a few profanities that he gets the idea. I think another guy close to the front actually took the photo. I don't know what happened to the rotund guy but he looked as though he would probably get trampled by the few thousand runners behind him!
The start was good and even with 10,000 people it doesn't take that long for the front to empty out and you can settle into a pace or group that you feel you should be at. The first 6 miles was done in about 35mins but for me there was a slight air of foreboding. I had gone through on PB pace but rising up from the Mall to the Dupont Circle area I just didn't have any fizz in my legs like I had at the B&A half a couple of weeks ago. When you have another 20miles to go that isn't a great feeling. Sarah had managed to make good time on the Metro though and on 18th Street it was good to see her. 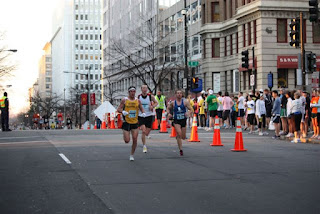 The next 7 miles heading back to the Stadium and the halfway point was relatively uneventful except for resisting the urge to tag onto the people who were winding up for the end of the half-marathon race. The fizz was still missing and I was realizing that the second half might be a struggle. Going through 13.1m, I was still on PB pace just under 6:00min/miles at 1hr 18mins. Due to the rather unattractive loop of the RFK parking lot I got to see Sarah twice and she held the phone up so that Mum and Dad, 3670 miles away in the UK, could give me a shout of encouragement.

Heading into the second half I was running in about 13th place overall but was gradually slowing down. From miles 17 onwards the race is pretty solitary as it heads out around the Waterfont area and over to Anacostia. You don't get much support apart from the volunteers at the aid stations and you are in little world of your own, just pushing on through. 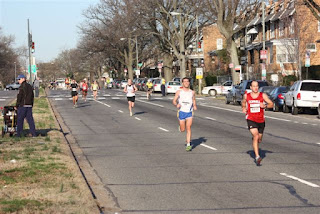 Back to the Stadium at mile 13

Although I said earlier that I hit the wall at mile 20, I would say that it was more like running into quicksand and it was a slow and gradual decline into hurt. I went through 20miles in 2hrs 2min, still on PB pace but I had been slowing since at least mile 18 and I must have been tensing up big time. By mile 21 my shoulders were really hurting and I couldn't shake it at all. 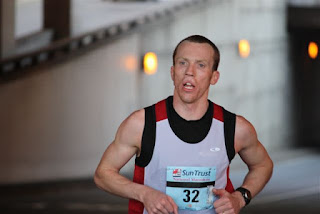 Soon enough I felt like I was up to my hips in the quicksand and the final 6.2miles took me 44mins......at a non-PB pace of 7mins/mile. When you have been running at 6min/miles the extra minute feels so slow and by this time I was really hurting. There were so many times that I felt like walking but I knew a top 20 finish was still on the cards. I don't think I have ever been more relieved at seeing a finish line......final time of 2hr 46mins 51secs for 18th place (out of 2400 finishers). A faster time than my marathon of last year but 5mins from a PB.....perhaps a Fall marathon should be on the schedule. 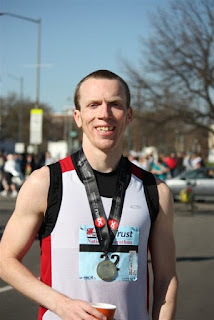 Wowwwww....way to hang in there. You barely beat my only Marathon time of 5:20, haaaa.

That is still crazy fast for someone in "quicksand".

Nice work, go for 2:36 this fall. It's easier to train in the summer and after a few hot months your body is ready for whatever odd weather pops up (hot or cold)then compared to spring.

My general rule about dead legs on raceday was this.....If you feel bad early (10-20k) do a few surges. If your legs don't flush out. Shut it down at 17miles and chalk it up to a training run and find another race in 2 weeks.