It has been a while since I raced a 10 miler and with Annapolis being home to one of the top 5 10 mile races in the world (according to Runner's World), why not run the Annapolis 10 Miler. It was the first time I had run this race and from looking at the course profile it's not a cakewalk!

The course heads from the Naval Academy Stadium to the City Dock and then back up to the Naval Academy bridge and into the hills of Saint Margarets before heading over the bridge once again and to the Stadium for the finish. The bridge alone is bad enough but the St. Margarets hills wear on you in the middle 5 miles!

This was actually only the 2nd 10 miler that I had ever raced and last time back in 2006, I had missed the hour by just 13seconds. I wanted to go under the hour. I guess that under an hour for a 10miler is a bit like going sub-55mins for a 40km TT. Not many do it! However, having not run that much since IMLP a month ago, I knew it would a close call.

I decided to go slightly old school and rocked the headband, trying to focus on my inner Jackie Moon and yes I think Sarah was slightly embarrassed by the look and the faux par of the black socks (courtesy of Beaker Concepts). Getting up front to begin with was the key and we immediately set off at a none too shabby 5:30min/mile pace, which I kept for the first three miles before hitting the hills! 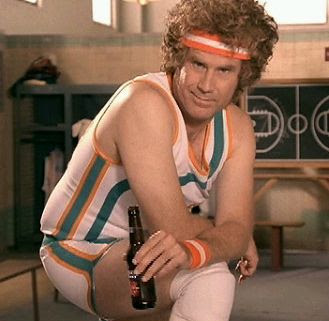 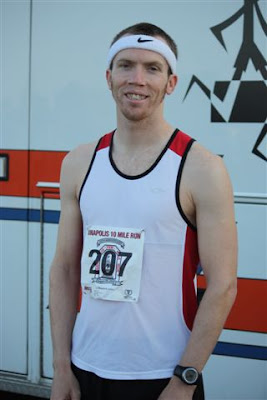 There was a small group of us with the to become winner sitting a few hundred meters off the front. He would eventually break further away to win in 55 minutes. Gradually the group split apart and through St. Margarets I was sitting in about 10th and was keeping the pace steady at sub sixes. Coming back over the bridge at mile 8, the race had blown apart big time and now the top 10 were strung out over a minute or two. I had just been passed for 10th and was sitting in 11th. I was, however, on pace for a sub hour run and coming into the Stadium I crossed the line in 58mins 59secs and was 11th overall and 2nd in age group. In the end 4,600 people finished! 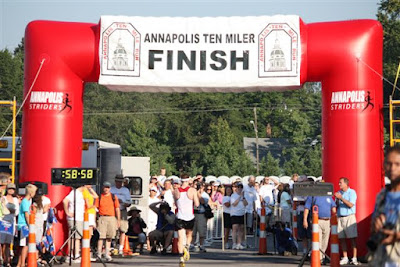 Guess how many went sub-hour? 14....for a total of 0.3% of the field! It just shows how tough getting under that hour is.

As for the race, it was well run as all Annapolis Striders races are and perhaps we are spoilt in this area to have them running so many quality races. To me the A-10 was no different to any of their other races and so I don't necessarily see why the race is ranked among the best 10 milers in the world. Again perhaps it is because we are used to quality races and perhaps because I am used to seeing the sights and sounds of Annapolis and the U.S. Naval Academy. One great thing about racing such a large local race is that you get to see so many you know both racing and spectating.....it seemed like I saw someone I knew cheering me on every mile! Either that or they thought I was Jackie Moon :-)
Posted by Iain Banks at Thursday, September 02, 2010