A bit of publicity for cycling in the City of Annapolis as well as ABRT never hurts and today we managed to cover both in the The Capital. Check it out the article here 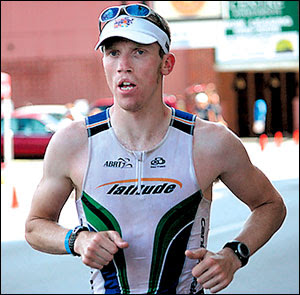 Triathlete Iain Banks works for the city trying to make Annapolis a safer place for bicyclists.

"Just to get a cold beer and a nice, greasy hamburger after a race is great,'' said Banks, a 31-year-old Englishman who lives in Bowie and works in Annapolis. "When you're training you really need to watch your nutrition and things like that, so for a few days after a race you really let loose; out come the cookies, out come the sodas and the beer. You just get to chill out and relax.''

A member of the Annapolis Bicycle Racing Team, Banks recently competed in his third Ironman Triathlon, setting a personal-best time of 9:56.47, good for 38th place among 2,900 competing amateurs at Ironman Louisville in Kentucky. Another ABRT member, Andy MacDonald, finished in 15 hours, 18 minutes.

The ABRT includes more than 100 members, mostly from Anne Arundel and Prince George's counties and ranging in age from 11 to 75. The competition level ranges from casual to intense. Well known throughout the mid-Atlantic section, the ABRT is ranked high not just in road racing, but also triathlons and mountain bike racing.

In addition, the group is active in the community, hosting four competitions a year as well as various fund-raisers and events promoting bicycle safety and awareness. In late October, in fact, the ABRT will team with the City of Annapolis to distribute 100 sets of free bicycle lights.

"We're not only a bicycle racing team, we have community outreach and a relatively large junior section,'' Banks said. "Although bicycle racing is a large portion of it, it's also trying to give back to the community.''

Growing up in the seaside town of Southend-on-Sea, about 40 miles east of London, Banks - like his father and older brother - was always an avid bicyclist. He raced competitively as an undergraduate while studying Traffic and Transportation

In 2004, Banks and his wife, Sarah, moved to Bowie so Banks could take a traffic engineering and transportation planning consultants position in Washington.

Since late May, Banks has been employed by the City of Annapolis as the Personal Transportation Specialist (Bicycle and Pedestrian Planner). Banks' goal is to develop a system that allows bicycle riders to safely co-exist with their fellow citizens.

"Annapolis is a great town to ride in; it's small, compact, and you can pretty much cycle from one end of the city to the other in 25 to 30 minutes,'' Banks said. "It's almost an ideal climate for it and it's relatively flat. We just have to get the facilities and the awareness for cycling and pedestrian issues.''

Some of the things Banks would like to see in Annapolis are more bike racks, lane and trail systems, and even showering facilities for employees who cycle to work.

"There's a lot that we can do,'' Banks said, "although, in many regards Annapolis is unfortunate in the fact that it's an old, maritime town so we're limited in right of way that we have. We can't just widen the roads and put in 5- or 6-foot wide bike lanes. We need to make do with what we have, which isn't necessarily the easiest thing to do. So it's going to take time to build Annapolis into a cycling community.''

At the top of Banks' list of goals is to push legislation making it legal for kids to ride their bicycles on the sidewalk. "It's against state law to ride on the sidewalk, effectively pushing cyclists into the road, which is crazy,'' Banks said.

Banks welcomes questions, concerns and suggestions from residents about how to make Annapolis more bicycle friendly. His e-mail address is ibanks@annapolis.gov.

Banks' position with the city is a contractual one until the end of June, 2010.

Just look at Cambridge and its ancient lanes but I sometimes think there are more bikes than people. You can do it - the Americans even come to Cambridge to take photos...

Cambridge (UK) is not a bad example but does have the advantage of being a University town....plus it looks cooler riding around town with your gown, mortar board and a bike :-)

Cheers Iain, this article is great!