Time to get the triathlon season underway and what a way to start. None of this getting up at 4:00am for a 7:00am start, it was a leisurely 7:00am wake-up and a 10:00am start for the Rumpus In Bumpass triathlon down at Lake Anna. The weather cooperated, triathlon's in April are always bit of a crapshoot, the sun was out but it was windy on the water and there were a few whitecaps on the lake.
The water wasn't the warmest at approx 66 degrees but it could have been a lot worse....the recent warm weather helped us out big time. The swim was fun as the waves were kicking up and creating a pretty decent swell. We headed out into the waves before turning right and have the waves crashing across us. I felt like I was swimming relatively well, not super but it was the first open water swim of the year so it takes a bit of getting used to. The final couple of hundred meters were with the swell and so we got to "surf" back to the dock a bit. I got out in just over 24mins, which is a little below par for what I normally swim and I would probably attribute that to the water conditions. Harder conditions don't help the average swimmers but do help the better swimmers......I need to be one of the better swimmers! 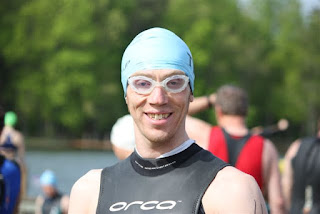 Through T1 I managed to put my hand through my wetsuit......it is over 5 years old and so about time that I get a new one! It has served me well, perhaps the age of the suit is why the swim time was slower, will a new one make me faster :-) 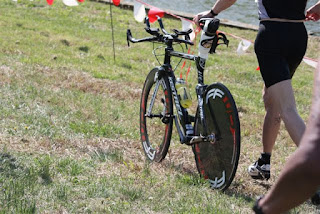 Out onto the bike and this is where I really wanted to do well. A whole new bike and wheels for the 2010 from Kestrel and FFWD, and I was excited to see what impact that would have. I felt great from the start and was flying along the 2 lap course. It was nowhere near as windy as it was on the water and it was a course which enabled you push along with only a few rollers thrown in to break it up. I was passing plenty of riders and importantly no-one had passed me. Coming through the 1st lap Sarah said I had 19 people in front of me (including a swim wave that started 4mins ahead) and I was dead-on for a sub-hour ride. 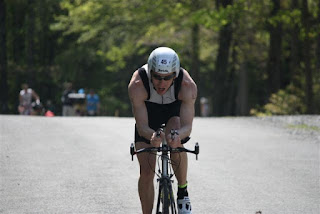 The 2nd lap was a bit more interesting as the course was getting more crowded with the other waves. Why do riders insist on riding the yellow line when they aren't overtaking and no-one is in the vicinity? Anyway with lots of asking kindly for people to move aside (AKA shouting!) I was still rolling along and came into T2 with a 59mins 39secs split. My fastest Olympic distance bike split so far.....obviously the bike, wheels and Spiuk helmet all worked!

I had worked my way to 13th (still with some waves in front and behind) and had the 10km to track a few people down. The first mile consisted of a few hundred meters of dirt/gravel path and I was through mile 1 in 5:45mins and had moved to 10th. The course was an out & back for 3 loops which made it good for seeing the racers in front and behind. Like the bike course the run was a little rolling but with the 3 loops it was hard to work out who was where after the first lap. I kept the pressure on and finished the run with a 37min split (5mins 57secs/mile pace), which was my fastest 10km split for an Olympic race.
So overall I ended up 5th (out of 700) with a 02:03:09, the 5th fastest bike split and the 3rd fastest run split. We won't mention the swim (41st). That gave me the age group winners spot and a nice beer glass as the award :-) This was great first race of the year and Setup Events did a good job. Sure the weather helped and we lucked out there......I wouldn't have fancied racing the sprint event the following day when the temps had dropped about 25 degrees! 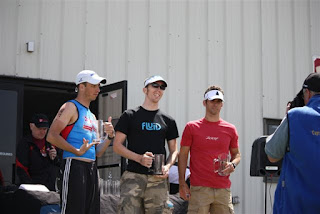 Rocking the Podium with a shout out to Fluid :-)

Onwards and upwards, next triathlon for me is the Kinetic Half-Ironman on May 8th, also down at Lake Anna but on the other side. That will be the next test as we get into the bigger races in June at Eagleman and then IM Lake Placid in July.
Posted by Iain Banks at Tuesday, April 20, 2010

Congratulations! Great start to the season!

you had the 3rd fastest run out of anyone, you crushed the bike too. Well done.
I was in the last wave (clydesdale) and the traffic was tough to get through.
Perfect weather, well-run event.
I got 2nd clydes. Did you get 2nd in age group?

Good job on your race. I got 1st in AG and 5th overall. It was a fun race to start the season. What other tri's are you doing?

I am registered for Columbia (May) and The Nation's Tri (Sept.) I loved the Lake Anna event; I am looking for a good olympic or half-iron sometime between may and sept... that isn't filled up
any suggestions?