I'm a bit late on this race report and to be honest it is probably because I have been dissecting the race ever since I finished. It has been a hard race to get over as I have conflicted thoughts about it all.

Yes, I placed in the top 100 amateurs and posted a 10hr 21mins time on a tough course, but I still think of it as a missed opportunity for a trip to the World Championships in Kona. Heading into the race I knew that a sub-10hr time would put me in good stead for a slot, previous years had all been around that time. I had trained and tapered well, the complete meltdown at Eagleman 70.3m was in the rearview mirror and I was loving the vibe of Lake Placid. My goals for the race were a 1hr swim, 5:30 bike and 3:20 marathon. Everything was set!

Race morning saw mild temps and grey clouds, almost perfect for long-distance racing. I got into Mirror Lake early so I could get a decent warm-up and also get a good seeding amongst the 2900 competitors. I sat back in the 4th row just to the right of the buoys and hoped to try and get some clear water as soon as possible. Once the cannon fired all hell broke loose for the next 10minutes or so. It wasn't as bad as I remembered IMFL but still I ventured slightly right and after the initial wash cycle I hit clean water and began to use the draft as much as I could. 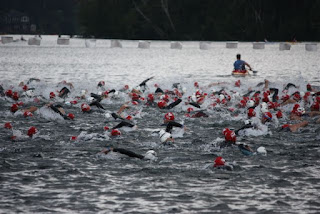 IMLP is a two loop swim and is one of the easiest swims in the ironman races, the water is clear enough to see in front of you and the underwater cable that delineates the buoys makes sighting real easy. By the time we hit the first turn swimming was pretty clean and it was good to get into rhythm. Hitting the beach after the first loop I was pleased to see 29mins on the clock and so was on course for the 1hr target. The second loop was pretty uneventful and I exited the 2.4m in just over 1hr. GOAL MADE! 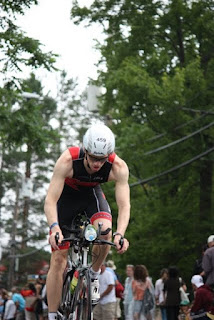 The run to T1 is pretty long but I managed to make up some spots as well as see Team Banks (Sarah, Mum and Dad). During the swim it had rained and now heading out of T1 the roads were slick and the first 20miles of the bike would have intermittent rain. Having driven the bike course and ridden parts of it, I was looking forward to the bike leg and was confident of hitting the target of 5:30hrs. IMLP bike course is two loops of 56miles essentially split into three sections, the first a rolling start with a 9mile descent to Keene, the second a flat fast section to Upper Jay/Wilmington and then the third is the 12mile grind up to Lake Placid along Wilmington Notch. This course is all about pacing and making sure that you don't become a first lap hero. The final 12 miles is all uphill with the "Bear" climbs of Mama, Baby and Papa (which was Alpe D'Huez style on the first lap with all the spectators) as you head into town and T2.
Surprisingly with over 2900 racers the course was not overly crowded and at no point did I see any pelotons forming. The nature of the course aids in that but it was good to see. The first loop was all about pacing and making sure that the nutrition plan was adhered to. The plan of Carbo-Pro (with perform) and water worked well, with the only solid being a powerbar at mile 60. That gave me 2000 calories (361/hr), 500gms of carbs and 1900mg of sodium. 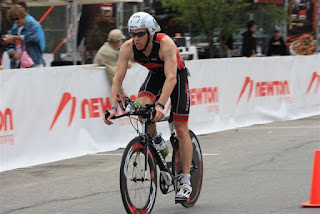 The first lap was done in 2hr 38mins and so I was on for a sub-5:30 ride. The 2nd lap was even more spread out than the first and that is when I made my only mistake on the bike, which cost me a 4:00min stint in the penalty tent. I was sitting comfortably and legally (four bikes lengths) behind a guy who I had been trading places with (I was stronger on the climbs, he was faster downhill) and was searching around for my salt caps when I got closer than the limit and typically just as a referee came up. My fault completely and I got the card to go to the next penalty tent to serve my 4min sentence. Oddly enough I had to wait 40miles until the tent at mile 110! It was annoying and I was mad at myself but at least I had the rest of the lap to try and make up those four minutes. I took the final 12miles up into town at a steady pace not wanting to hammer the legs before the run and after a stop at the tent, I rolled into T2 just over the goal in 5:31hrs. 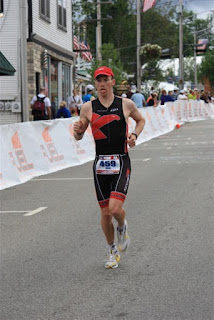 I was still on pace for a sub 10hrs but would need to run my goal time to hit that, I had no wiggle room whatsoever. The first mile at IMLP on the run is all downhill and so you head out looking like a rockstar! The good thing was that the first few miles felt easy and I was reigning myself in to keep at a pace around 7:00min/miles. Even on the first few rollers I was feeling good and kept to the nutrition strategy of water and perform at each aid station, with a gel every 3miles.
By the end of the first lap (including the climb back to and through Lake Placid) I had worked my way up to 13th place and was still on pace for a sub-10hr finish (just!). Heading out of town amongst the chaos that is an ironman run course, I began to falter and my hamstrings felt like someone had just connected some weights on them. From then on it wasn't pretty.....it was just my hamstrings though, I wasn't feeling dehydrated or in need of food, all of that was fine. Just to keep the legs moving was a struggle and I knew that the hopes of a sub-10hr and Kona were gone. I was in my own private battle to finish as quickly as I could, if only I could have unhitched the weights on the hamstrings! 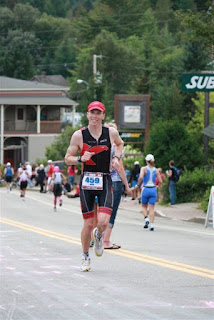 The final 10miles were run at probably around 10min/miles and that led me to a 3hr 42min marathon and a 10hrs 21mins 11secs finish for 25th in age group, 123rd overall and 94th amateur. So it wasn't a Kona year but it was a solid race on a great course (the final Kona slot went at 9hrs 59mins....henced a missed opportunity!). 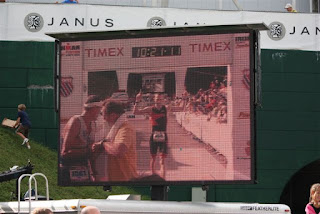 On the screen finishing in the Olympic Speed Skating Oval

With this being my 4th Ironman, I am still learning about racing this distance and it is a process that will be forever evolving. This year I hit the first two goals of the race but failed in the third on the run! Now I need to deconstruct the race and make adjustments in training as I move forward.
Ironman isn't easy and qualifying for the World Championships is even harder, if it were easy everyone would be doing it.......it takes something special to get to the Big Island! I have the motivation to get there and racing Ironman again makes me want to succeed even more.
Posted by Iain Banks at Tuesday, August 03, 2010

Thank you for posting all the details Iain. It's good to have the opportunity to hear how it went having lived it just through tweets and the main website on the day. Can't wait for next year to hear that you have reached your goal and are a proud competitor in Hawaii :-)