I had signed up for the Mountain Mama 100 a few months ago after Ace had ridden it (and come first) in 2009. It isn't a race, it's a century ride, but a century ride with 9 mountain climbs and 13,000ft of total climbing........exactly what I needed two weeks after an Ironman!

The ride takes place out in Monterey, Va. and we stayed in a great old farmhouse just outside of town, no cellphone reception and no internet! We headed down Friday afternoon with Stu and Christine and met Ace and Tina at the house, with a meatball dinner awaiting us.

The ride started at 8:00am with a mass start and immediately the climbing started....2.5km at a 7.9% average. As you can imagine it split the field immediately and by the top the leaders were down to a handful. On the downhill however, the group grew and it wasn't until mile 32 that the field would split for good. It was here on the 15% grades at the top of the 3rd climb that I lost the lead four that included Ace and Stu, and for the remaining 68 miles I was having a good 'ole time riding through the mountains of West Va. on my lonesome. 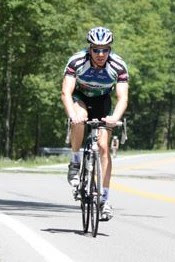 To say that this ride is back loaded is a bit of an understatement. I rolled through 50miles in 2.5hrs and then the long climbs just kept on coming. Over the next 50 miles which would take me 3.5hrs the ride takes you over 16miles of climbing at approximately 7.5% average. The scenery was amazing though and with temps in the high 70's it was great day for riding.

For me, not only were the legs a little weary after Ironman, but I have never climbed anything like this. It was my first experience of sustained climbing and I was glad I had the 11-28 on the back. It was so nice to have the 28 as a bailout gear and it was just a matter of grinding up and up.......apart from when the dogs of West. Va chase you!


With Sarah and Christine (after her 27 mile ride) driving unofficial ABRT sag around the course, it was tempting to just pack it in after 60-70miles but I stuck it out for a finish time of 6hrs....40mins behind Ace (first again) and Stu (fourth). If you even need to get some decent climbing training and want a well supported century to do, you can't go far wrong with the Mountain Mama! 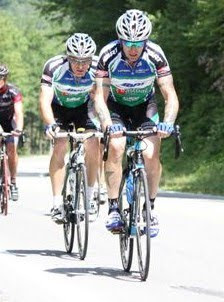 Ace and Stu keeping the hammer down.

Great event, you did a good time. When I did it 2 years ago I had to stop at almost every rest stop for water. Didn't make it this year, did have the miles in my legs. Hopefully next year.