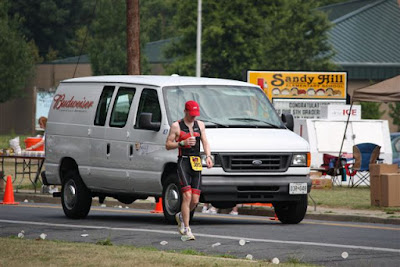 As you can see it wasn't a glorious day at Eagleman 70.3m yesterday. I ended up with a DNF and now have to pick myself up and prepare for IM Lake Placid which is only 6 weeks away.

The race started out pretty well. The water was deemed too warm for wetsuits and typically I hadn't packed my speedsuit! But despite that I swam well and was out in 17th place. I was amongst the racers that I knew would be the players as the day went on. 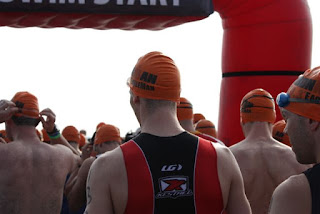 Out onto the bike and I was rolling along pretty well, overtaking some of the faster swimmers and even in the headwind was keeping a decent average without working too hard. It stayed that way until about mile 30 but getting the advantage of the tailwind wasn't as good as it should have been. It seemed like I was losing power and that was despite taking in food and drink religiously throughout the bike nothing was being processed in my stomach. It was all just sitting there refusing to help me! 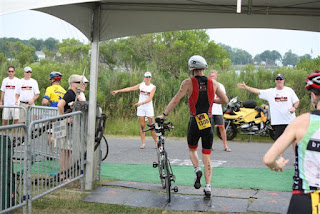 I headed back into T2 after a 2hr 21min bike split and was in 7th place. However, immediately on heading out onto the run I knew that it wasn't going to be pretty. I was slow out of transition and had nothing whatsoever in my legs, they were dead and it was the best I could do to run/shuffle the first two miles. The photo at the top shows me walking after the aid station at mile 2. I ran slowly past Sarah, and just wanted to hide. She sacrifices so much for me to train and race and I just couldn't deliver on race day. I knew that any chance of a World Championship slot was gone and just hoped the legs would respond to some nutrition and could get me to the end of the day.

It wasn't to be.....I walked/ran to the aid station at mile 4 and knew by then that the day was over. I probably could have continued for the next 9 miles but it would have been beyond my limits and it would have taken me a long time to recover from. With Lake Placid on July 25th I need to be back on it within the week and I don't think I would have been if I had continued. In hindsight perhaps I should have realised that something was up when I had too many trips to the bathroom on Saturday.....

Yes I am crushed that I didn't race to my potential but these things happen. It's the first race that anything like this has ever happened to me and I should count myself lucky after 6 years of long-distance triathlons that it hasn't happened before. I need to put it behind me and trust in my training and racing and make sure that it was just a blip, which will be rectified in Lake Placid. Today I've signed up for a triathlon on July 10th and so that will be the time to get back on the horse and get some confidence back!
Posted by Iain Banks at Monday, June 14, 2010

Chin up Mr, you are amazing at your races & I have much faith that this little blip will be nothing but a minor annoyance in your glittering career!
More importantly.......anything you want to say about Green!?
:-)

I watched some of Eagleman hoping to cheer on Iain and another triathlete I had met at a Spain cycling training camp, Anne Fallows.

Iain looked good at the start of the bike leg, powering by several other cyclists who were trying to get their feet into their shoes. I rode part of the bike route backwards and did see Anne, but must have missed seeing Iain.

I was going easier than most of the triathletes, but did notice that it was uncomfortably hot, and I went through much more fluid than normal for me, and was still rehydrating hours later. So I think the weather was hot helping on Sunday.