Now We Get Onto The Serious Business......

After the Tour of Walkersville and Tysons Corner this past weekend, we get into the serious business of the triathlon season with the Rumpass in Bumpass Triathlon on Saturday.
The ToW was fun, the 4/5 race (afternoon race) was a spirited field and ABRT had a nice active race that resulted in Justin sprinting to a 2nd place finish. I rolled in 26th, job done after doing plenty of work in the race, reeling in the one major break and leading Justin to the line. Overall it was a good team effort. 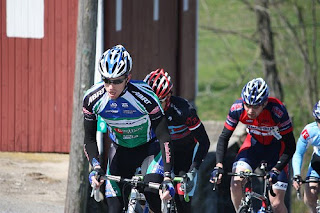 Tysons Corner Cat 4 was kinda frustrating, at least it wasn't the crash fest it was last year, and apart from being in a 7-8 lap break there wasn't much to talk about. I'm not sure if it is the same in the other fields but the Cat 4 race basically consisted of hammer up the hill sitting in the top 10, work across the top still top 10, head down the hill, get swarmed by everyone trying to move up and be in 50th after the bottom of the hill, peloton strings out again and you end up top 10 going into the hill. Why does everyone work so hard to get a top 10 position on the downhill just to lose it going up the hill.....everyone should just chill for a while! 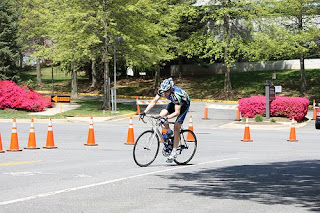 So onto the proper stuff with the first triathlon of the season coming this weekend on Saturday down at Lake Anna, VA. It's the Rumpass In Bumpass Olympic distance and luckily the recent warm weather has made the water temperature creep up to about 70 degrees. Although the funny part is that the race takes place in the southern end of the lake where the nearby Nuclear Plant dishes out its hot water making that part of the lake a few degrees warmer than the rest. Based on numerous Simpson's episodes I'm a little worried what will happen to us that swim in the water!
The race should be cool as it will be the first serious test for the new equipment, particularly the new Kestrel bike and FFWD wheels. It has be noticeably faster in training and so I am hoping that it corresponds to fast race times. This week has a been a planned recovery week and so by Saturday I should be raring to go. The last triathlon of 2009 was at the end of August at IM Louisville and so it has been way too long. It will be a great test to start the season :-)
Posted by Iain Banks at Wednesday, April 14, 2010

Thats why I hate Tyson's. Wasn't it the perfect description I gave about Tyson's. Hammer up hill and then rest. I hate it. Personally I would go from 10th to about 30th because I am a fat ass on the hill and on the down hill my weight would put me in front of everyone on the down hill. Oh well.

Good luck with your Tri.