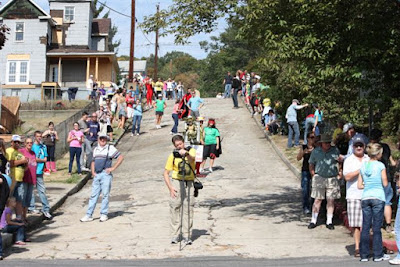 With a guttural roar the Savageman field got underway in the cool waters of Deep Creek Lake with the aim of surviving the day to become known as Savagemen and also receivers of the coveted brick on the Westernport Wall.

For good reason the Savageman triathlon has been ranked as the toughest triathlon in the world.....a bike course that climbs 5800ft, primarily in the middle 30miles of the 56 miles bike course and 7 climbs with pitches in excess of 15%. These climbs include:

The jewel in the crown is the infamous Westernport Wall with the added bonus that if you successfully climb the wall within falling or dabbing a foot and then finish the race, a brick with your name on it is placed in the wall at the top.

The swim is actually pretty nice, in clean water and on a day with little wind it was completely calm....perhaps it was the calm before the storm! I exited the water is just over 28mins and was in 6th place AG. Now onto the bike and the small climb right out of transition over the Toothpick.

The first 18miles of the bike are rolling and then a great 5mile descent down to Westernport when the climbing really begins. Not only is Westenport the home of the Wall but it is the start of the 7.1mile climb all the way up to Big Savage Mtn. It's this 7.1miles that they do a timed King of the Mountains prime.....kinda neat!

So the Wall.....you really can't describe it, 31% on a regular road would be hard but 31% on a blend of cracked concrete and cobbles is even worse. To add to the trouble is that the 30-34 AG was the third wave on the course and so when we got to the Wall there were a host of the backmarkers from previous waves making their attempt! We drove the course on Saturday and so I knew what I was in for and I even managed to ride the wall twice on Saturday just to make sure! The 11-28 at the back was definitely needed! On race day the Wall was amazing.......a free shuttle bus took spectators from the race site to the Wall and it was a three hour long block party with people lining the street 3-4 deep. I imagine that it was similar to an epic climb at the Tour...... 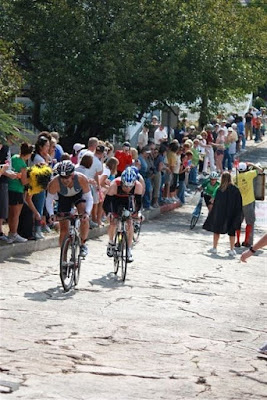 Fortunately I made it up the Wall with no major issues although did have to dodge a few "weavers", now it was onto the rest of the 5800ft of climbing over the next 30miles. Oh yeah and I was on the TT rig with the FFWD's 900's (left the disc at home). 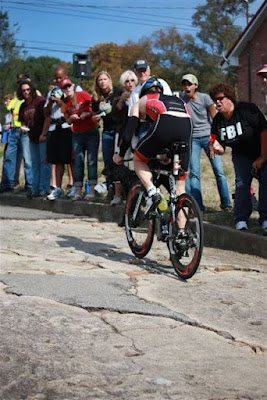 My motto for the day was to ride conservative and steady.....you can't go out and blaze a course like this and then run well afterwards. In many respects it was like an Ironman race strategy of steady riding esp. on the climbs and making sure that your nutrition was spot on. The timed climb over Big Savage Mtn was 37mins for me at 11.3mph and was 26th fastest of the day but in looking at the results it obviously paid off as a number of the faster riders paid for it later on the bike or on the run :-) 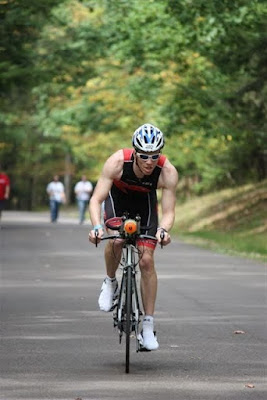 The steady bike put me at 3hrs 5mins for an 18mph average and had me back into transition with just one AG'er ahead of me, who I actually overtook in transition. I was now out onto the road in 1st place AG. The first section is on trail and then you head out into the campgrounds and hit the hills. The bike course is brutal but the run isn't much easier and so the name of the game was to take it easy for the first few miles and see what shakes. The nutrition plan was spot on and I was feeling good on the first few miles, even more so when I went past Sarah and Jessica and was told that I was 1st in AG.......to hear that is a better boost than any gel or drink can give you :-) 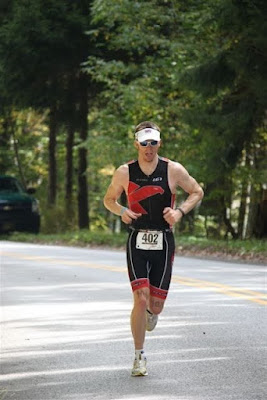 The trick now was to keep the pressure on and make sure that no-one could come up from behind. After the campground hills, it was another couple of miles of rolling hills before hitting the trail climb of the Thayerville Fire Tower Road. As I was approaching the Fire Road it was then that I saw the race leader, which was fellow Brit Phillip Graves and Ironman Champion, a last minute entry and he went on to win with a course record. The run course was fun it was the first time since back at the Kinetic 1/2 that everything seemed to click into place. While the run was certainly hard, it felt as though I was in control and had it all dialled in.....typical that it was the last race of the year! 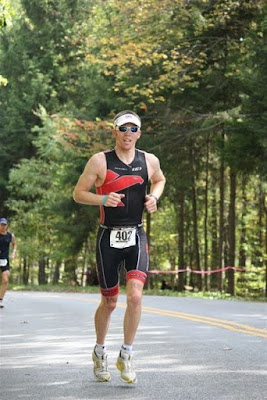 I rolled across the line for a 1hr 37min run (10th fastest of the day) and an overall time of 5hr 15mins. It gave me the AG win by 7 minutes and 15th place overall. In hindsight I think I should have raced the Elite wave as that would have placed me in 5th Elite and perhaps would have pushed me harder all day long. Plus I would have been in the same wave as the stacked pro field! Despite that it was a great way to end the season, I got a brick in the wall and a cool picture signed by 6x World Ironman Champion Dave Scott.

You are amazing (though clearly slightly insane as well.... you call this sort of thing fun?!) Looking forward to seeing a picture of "The Brick"... Stu still has the one you gave him at our wedding ;-)

CONGRATULATIONS!
Well done Iain, looks like a great day had by all, very cool to get a brick in the wall....not sure i could walk up it let alone ride it!
A great end to the season!
:-)

Congratulations on your race, your great finish, your brick, and great report and photos. From the woman who finished about 4 hours after you, about 7th from last but DID finish, and with a brick!!

Ellie, great job on finishing a tough course and getting the brick!

Iain, congrats on winning our age group. That was a strong performance. I'm looking for pics people took at the race course. Do you have any you can share? I'd be willing to trade the ones I have of the swim start, Wall, etc (www.http://picasaweb.google.com/brocklanier/SavageMan2010). Let me know; I can send you the full size images if you'd like to trade. Brock