The first race of the year is always interesting. You put the training in but until you get into a race situation you never really know what your fitness is like. Well, yesterday I got the first race done and dusted and it turned out pretty well.

Race conditions for a half-marathon were great, a little chilly at the start but once you got going it was almost ideal temperatures. Circumstances that are normally taken care of at home but weren't, had me standing in the porta-john queue with just five minutes to go before the start. Fortunately the queue was fast moving and I managed to get things taken care of and then hit the front of the startline as the National Anthem started up. 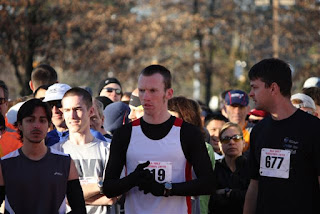 Just in time for the start........suitably relieved!

For a half-marathon there isn't much of a gameplan, it is really just a matter of hit the start hard and hang-on for the next 75mins. So with that in my mind I went at the gun and led the field out of the school and onto the road. For the next 4 miles that's the way it stayed with just a Navy runner on my heels and one other a few meters back. I was actually feeling really good and after the first few miles at 5:35's, we settled down into some 5:40-5:45's. We were clipping along at pace that would easily give me a new personal best. 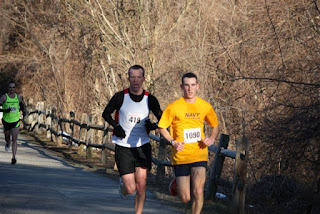 Between mile 4 and 5, the runner in 3rd made a strong surge and opened up a gap, which he would pretty much hold until the finish. Running through 10km I posted a 10km personal best at 35:25 and was in 3rd on the heels of the Navy runner. It was between miles 6 and 7 though that I lost his heels and dropped a few meters behind.....the 10km PR was taking it toll and we were only halfway through. 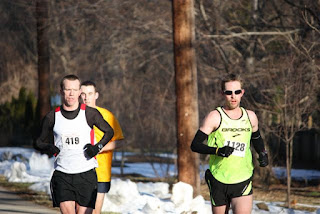 Can't hang onto the surge

Importantly though I wasn't dying and the pace was still good, just not good enough for 2nd! Coming back up the hill from the turnaround, I could see that the top 3 (me included) were a substantial distance from the chasing pack and that failing a complete meltdown I would be on the podium.

The journey back is always good as you get to see the rest of the field and for a few miles you get to pick your way along the trail making sure not to bump into people who are in "the zone" and not realizing that runners are coming the other way. Plus I got to say hello to Jessica and Lindsay who were both competing. 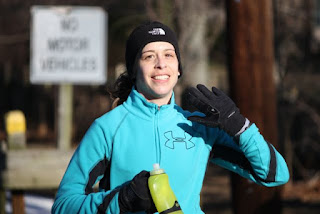 I was now running solely for a PB as 1st and 2nd were about a minute up the road and no-one was close behind. The pace did begin to slow slightly but the encouraging thing was that it was dropping real slowly and all things look good for the marathon in two weeks. The only mile split that was above 6:00 was when we came back up the hill and it just about scraped above! I also managed to get a new PB at the 10 mile split going through in close to 58minutes.

In the end I crossed the line in 1hour 16mins 30secs for 3rd place and a new PB by 2 minutes. It was a 5:50min/mile pace and I was well pleased with that. As I said, it bodes well for the marathon on March 20th as well as the upcoming triathlon season. 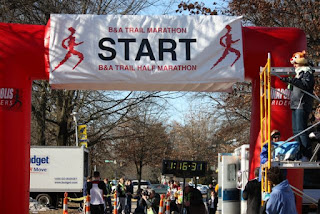 After some hydration and the awards ceremony, I cruised home on the bike and put in a good 30miles as a cool-down. I even saw Kyle Jones out on the roads for the first time in a long time and cruised with him a while.
Posted by Iain Banks at Monday, March 08, 2010

Well done you! A new PB is GREAT!
Wish I was out for the marathon.....soon I promise!