The countdown for the new bike has been on for a little while, but it is coming soon....in the meantime we have to make do with a small press release about the new Kestrel 4000 Pro SL.

Today the following article was on Xtri (courtesy of TTBikeFit) about the Kestrel 4000, including a photo of what's coming :-)
"Kestrel 4000 Geometry Just Released 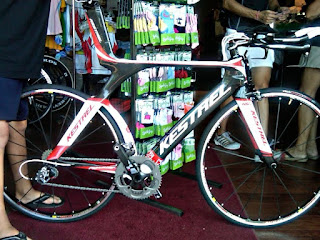 The Kestrel 4000 Pro version - one of two in existence.

Check out the TTbikefit blog for the stack and reach measurements relating to other manufacturers. Kestrel is positioning the 4000 more towards the short-and-high (reach-stack) end of the spectrum in the middle (and most popular) portion of the size range. They looked at thousands of actual rider setups and decided that this geometry will suit more real-world athletes. The 4000 geometry will actually compliment the Airfoil well, as especially in the smaller sizes the Airfoil is the longest-and-lowest frame you can get. "