The alarm rang at 4:30am and I was 3 hours from racing Ironman again. It's hard to describe the feeling of an Ironman race morning and I'm sure that Sarah as a supporter also finds it hard. You have so many feelings.........expectations, nerves, worries, everything that could run through your mind makes a fleeting dash across your brain waves. Those feelings have changed since my first Ironman in 2006, then it was "can I make it through the day", "have I trained enough", "did I hydrate properly". Now my feelings are more along the lines of "I'll be disappointed with such and such time", "I want to race and compete rather than just finish", " I've trained to put myself in with a chance of a Kona slot". Of course it doesn't mean that you don't get nervous, it's just that you put much more pressure on yourself to do what you feel you are capable of.

I had trained well heading into the race, the taper leading up to race day had gone well, I had watched the marathon of Cash Cab on Discovery on the Friday and Saturday and now it was ready to let loose. 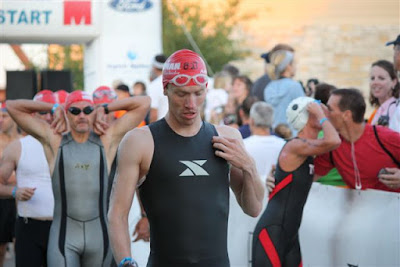 Swim: The time trial start was a bit of an anti climax compared to the mass start of other Ironman events. The line was huge and we were way back sitting down on the road in the pitch dark along with everyone else. We heard the cannon for the pro's go off and 10mins later the cannon for the age groupers. The line then started moving and it was at 7:24am that my feet finally hit the water. I actually felt quite good in the water but it was more of an effort than I thought it would be to get around all the slower swimmers. You had to be continuously on the look out for slow swimmers ahead and it was harder to get into a rhythm. Just before the turn it all got a bit weird when I noticed people ahead were walking....yeah walking in an Ironman swim. I then found out why as my hands started dragging on the bottom of the Ohio River, a few dolphin dives and we were quickly swimming again. After the turn everyone was expecting the current of the river to provide a nice push for the remaining 1.5 miles to the swim exit. Errr, wrong! The current was almost non-existent compared to the morning swim on Friday! I'm not a huge fan of swimming 2.4miles anyway but this swim seemed to be taking an age and I was really surprised to see an Ironman swim PR when I got out the water.

T1: 02:51 I pretty much have transitions down and apart from taking the speedsuit off and putting on the race belt and a pair of socks there isn't much to do. Helmet, glasses and shoes are on the bike as was my nutrition. For the first time in a race I left my shoes on the bike and it went relatively smoothly.

Bike: I hadn't pre-rode or driven the course but had spent a while looking at the trakkers video of the course, which covered all 112 miles. Various reports had stated you could stay in the big ring the whole ride.....after climbing the first of a succession of hills/rollers I decided that I probably could stay in the big ring but I might not be able to run afterwards, not a good plan if you have a marathon coming up! I don't race with a HR monitor or power meter and go purely on feel. The first hour went by really quickly and I had covered 21.5miles. It seemed that I had passed loads of the people that had started before me in the swim and although there was noticeably people on the course it didn't seem particularly crowded. The La Grange loop started with a nice set of rollers and I was looking forward to seeing Sarah again (the town provided a free shuttle to/from Louisville), which always makes the miles go a bit quicker. The La Grange loop was about 30miles and we would do two circuits of it. This was bit of a leg ripper and the average speed begun to slowly falter and head in the wrong direction. I knew it would happen based upon the times from last year but it's always a bit demoralizing to see time slipping by. I almost managed to lose my race belt but just caught it as it was falling from my waist towards the rear wheel. 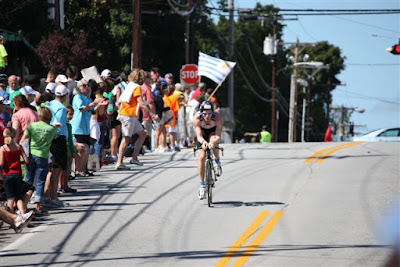 Everyone said how nice the Kentucky countryside was and I'm sure it was, from the brief times I actually concentrated on the surroundings it did appear like nice horse country! The 2nd time through La Grange meant that I wouldn't see Sarah again until the bike finish but it did mean that I getting closer to the final 20 miles where everyone knew you could crank it (if you had enough energy left) on the generally downhill roads. Nutrition had been going as planned, gatorade every 15mins and half a powerbar every 30mins until the final 2 hours when I changed over to Espresso Hammer Gel....give me the caffeine! I always made a point of trying to hit the bottle discard net when I jettisoned a bottle at the aid stations, most of the kids cheered when you scored :-)

The last 20miles were pretty much downhill and I was sure the average speed was rising again, couldn't tell for sure as of the 2nd Ironman in a row the bike computer was buggering about. I was therefore pleased that I came into T2 under 5:20. Prior to the race I had wanted to go about 5:10 but on seeing the course I liked the under 5:20.

T2: 02:14 T2 was a doozy. A quick jump off the bike, helmet off while running down the transition shoot, collect bag, empty bag, put shoes on and grab the visor and Garmin...out the tent. Voila.... 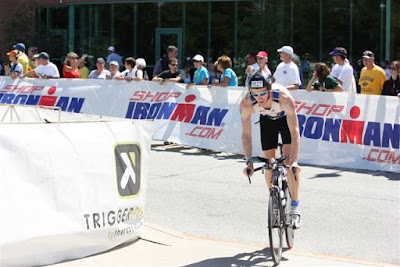 Run: I felt like I had biked slightly within myself setting up for what I hoped would be a good run. I had no idea of where I was in Age Group and wouldn't do until after the race, that's the downside to the TT start. I needed to go sub 3hr 30mins to get under 10hours. The run start was great, I felt comfortable and was putting out sub 6:30miles for the first 3.5 miles before settling in to a more sensible and what still seemed comfortable 7:10miles. The only worry I had was that I had yet to pee all day.....I was 7 hours into the race and despite drinking consistently I hadn't gone once on the bike. 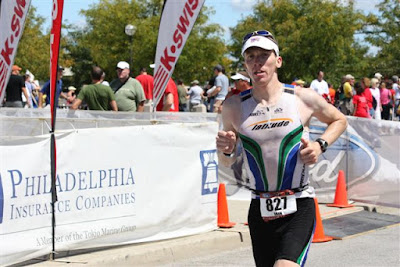 Suddenly and without warning however, my right hip started to ache at about mile 11. It was gradually getting worse and over the next few miles my pace dropped from 7:15miles to 8:15miles. It was definitely something to do with my ITB as the right knee started to feel it as well and I walked an occasional aid station to give it some respite. It also gave me the opportunity to knock back some coke and ask the volunteers that yes it is about time to open up the cookies. The occasional walk made the hip and knee feel better but only for so long, it was time to HTFU and get on with it!

It was also around mile 11 that the time came to pee. Now most Ironman racers will tell you that it is certainly acceptable to pee oneself while racing, so I don't have to justify it :-) I dread to think what non-racers think when they see you running down the road with a trail of what looks like orange gatorade coming from your shorts when there isn't a cup in sight! Only when you're young, old or racing Ironman is it acceptable to pee yourself! Anyway I proceeded to do it another couple of times before the day ended......fortunately Sarah wasn't at any of those moments and so they aren't on camera. 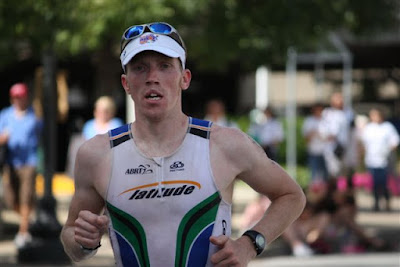 With the hip hurting I had resorted to running while holding the hip, which did make it feel a bit better. It was odd though, in the fact that the legs actually felt pretty good and I think could have gone a bit quicker if it wasn't for the hip. Running is generally my major strength in triathlon racing and it was a little frustrating to have to reign it in a bit. It wasn't all bad though as I got through the half marathon in 1:37 and on course for under 3:30 for the marathon. I wasn't entirely sure of my overall time though as I had accidentally stopped my watch for a period of time during the run. I knew that I was relatively close to the 10 hour mark and so just to make sure I laid it down for the last mile. The finish chute was empty, I saw Sarah and then those four magic words from the living legend that is Mike Reilly could be heard....."You are an Ironman" . 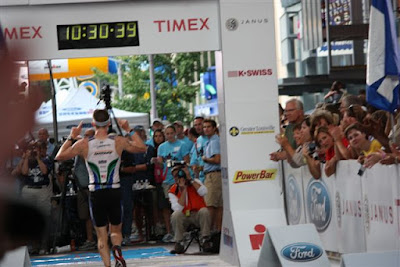 Wicked I had gone under 10 hours and had placed decently in my age group. Team Banks from all over the country (Jessica) and the World (Mr & Mrs Banks Snr, Lisa) had been following intently on Ironman.com and were providing Sarah with regular updates. No I hadn't got an automatic spot to Kona but I had raced to put myself in with a chance. Now it was time to wait for the rolldown and time to recover. I saw Kona Kev (we had a battle last year at ChesapeakeMan) in the finishing area and spoke to him briefly, and also met someone who read the blog. Unfortunately I didn't get his name but it was cool to meet up.

It was now left to get a massage, order the Papa John's pizza, shower, put the Zensah socks on and head down to the finish to see Andy come across the line. Seeing Andy finish at 15hr 18mins was great, I know that he hadn't trained as much as he had wanted to but he laid it down. He came across with the America Flag flying in memory of one of his best friends killed in action in Iraq last October. Very moving to see and as Andy said "My one day of pain doesn't compare".

No I didn't get a Kona slot, they rolled just the one spot to 7th. I had met all of my goals and so couldn't be disappointed, I had finished, I had raced to a new Ironman PR, I was under 10 hours and I put myself in with a chance of a slot.....it's not every day you can say you met all your goals! Besides I have the confidence that I can race Ironman, not just to finish, but to compete....... 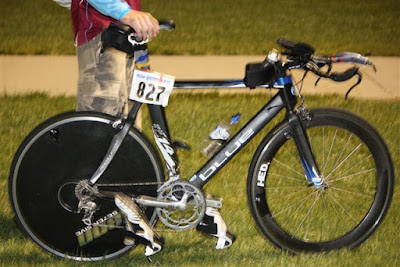