There have been some recent changes to the race details and it now looks as though the swim start will be a bit less chaotic. The previous format had been a time trial start because the river couldn't handle a mass start of 2500 athletes like in other IM races. The TT start made it a bit of hassle as you had to queue up on a jetty and just wait in line until you gradually got to the front. You can imagine how long it takes to get 2500 racers into the water....last year it was somewhere just under an hour. So for this year the TT remains but they have two start areas and hope to get everyone into the water in under 30mins. The race start is still 7am but people in previous years have started to queue before 5am.....jeez! Hopefully the double swim start will make it less of an issue to queue in the middle of the night :-)

The weather forecast looks a bit dicey 10 days out and I'm sure it will change a few times before race day but currently it looks like this: 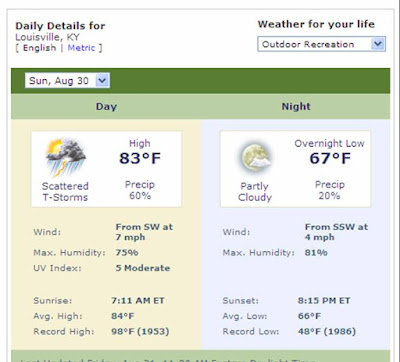 Not blazing hot but T-Storms........it could be like ChesapeakeMan all over again!
Posted by Iain Banks at Friday, August 21, 2009