It felt good to be back at a triathlon, unlike road racing where many race every weekend, triathlon racing for me is a rarer occurrence as I generally schedule two "A" races for the year and everything else is just included into training. Yeah, I guess I like the training and it does put a bit more pressure on those main races but I think it is better than racing just for racing's sake.

Anyway, Diamond In The Rough triathlon is a tough little race and pretty popular in this area. It has a limited field of 500 and sold out again this year. I hadn't done the race since 2005 and couldn't really remember the bike course that well. All I could think of was the one long hill and the steep descent with a nasty left-turn at the bottom....I thought the rest was relatively flat! Errr.....WRONG! The course is a constant roller coaster and makes you work for every single minute. Unfortunately I had told Kerri in transition that apart from the one big hill it was largely flat...she must have been cussing me out for the final 26 miles of the bike :-)

As I stated on Friday, I left the wetsuit at home and was using the speedsuit, which worked out pretty well.....the water temp. was conveniently 78 degrees so wetsuits were legal (I think they went out way into the Bay and dropped the thermometer about 30-Ft!). The suit felt just like a wetsuit without the additional buoyancy that you get and I got out the water in a time similar to previous wetsuit swims for 1 mile. Unfortunately I was back in 45th place and had lots to do on the bike and run! 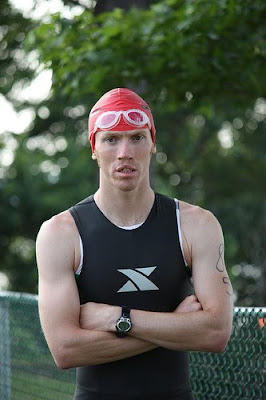 The bike course was fun with the hills and even before we had gotten out of the park I had overtaken about 15 people.....not being funny but Olympic distances races really do feel more like a full on sprint and I just tried to go as hard on the bike as possible without thinking about the run to come. It paid off in that I had the 6th fastest bike and coming into T2 I was up into 6th place overall. A speedy 28secs later and I was off onto the run....... 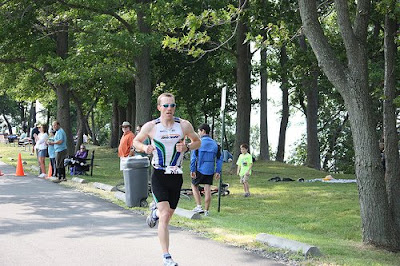 I felt great from the start and was aiming just to lay it down as much as I could. I could see a couple of guys ahead and so they provided some focus. According to the first mile marker I went through in 4mins 38secs....error on the course I think as I went through mile 2 after 11mins 25secs! By that time I was into 4th but had seen that 1st was way up the road with little chance of being caught. I could see 3rd though and for the next 2.5 miles I gradually made up ground. It wasn't to be as I literally ran out of road and I came through the finishing chute in 4th place 20secs down on 3rd in 2hrs 6mins. Importantly I had put down the fastest run of the field at 28:47 for 5 miles.

All in all a good result which gives me some confidence as I head into the final training block before Ironman. Sometimes you just need a race to blow away the racing cobwebs and to make sure that everything is on the right track. I have one more triathlon before Louisville, which will be the Spirit of Morgantown half-ironman.....now that is hilly by all accounts! 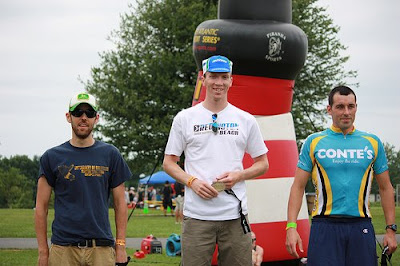