In a slightly odd scenario I found myself toeing the line on Sunday at 7:30AM in the red, white and blue of the United States of America getting ready to start the first run of the World Long-Course Duathlon Championships. Having qualified back in July at the Blackwater Traverse Duathlon this was only my second ever duathlon and it was a World Championships :-)

We had headed down to Richmond, VA on the Friday night to enable me to get up on Saturday morning and pre-ride the course. The bike course was rumored to be technical, rolling and on a poor road surface.....some had decided to forgo their tri-bikes and go with a road bike. Riding the course on Saturday morning I could see why some people decided a road bike set-up might be better but in the long-run I felt that the tri-bike was by far the better and faster option. I did however, shy away from using the disc-wheel and went with the deep HED's instead. The course was 19km long and was to be covered 4 times. Although technical and rough, it looked as though it would be fun and certainly not a typical tri/du bike course.

The rest of Saturday was pretty much just an R&R session, doing the usual pre-race check-in's and athlete meetings etc. With Team Banks in attendance we all headed off for the race pasta buffet and let's just say that some Team Banks members made the most of the buffet (including chocolate cake!)....I won't mention names but a clue would include the words Banks, Mr, Senior. After watching the first half of the Terps against Virginia, it was to bed for an early rise on Sunday morning.

Fortunately, the transition area was literally only a 5 min walk from the hotel and so there was no pre-race jitters about getting stuck in traffic. After quickly setting up my transition items (in the dark!) it was off for a quick warm-up and then into the starting area for the 7:30AM start of the age-group men - no waves just all of us at once. 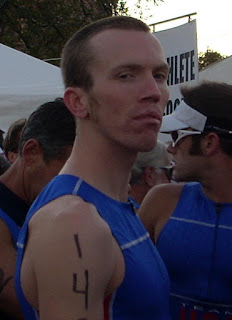 The first run was two-loops of the course for a total of 15km. As per usual in duathlon the first run was blazing fast and you feel like shouting out to everyone just to remind them that we do have a 50mile bike and another 7.5km run to go! The run course was great and featured some cobbles, bridges and the final 3.5km was along the canal walk area. Coming through the first lap in 27mins 17secs I was in 5th place in AG and about 35th overall and after making up a few overall places on the 2nd lap at 27mins 59secs I was heading out onto the bike in 5th AG and 32nd overall. The 15km run had me done in 55mins 16secs (5:56min/miles) and funnily enough is my quickest 15km ever.....having only done a hilly 15km previously it wasn't too hard to beat. 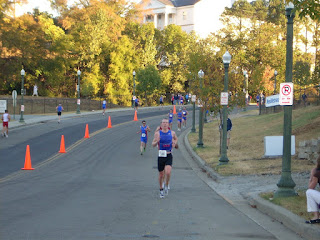 Going out onto the bike is never nice in duathlon.....the legs are completely trashed from the first run and it normally takes me a good 20mins or so to get the feel for the bike legs. In that 20mins though you are still pushing real hard which makes it doubly tough! As previously stated the bike course was 4 loops and 76km...on real rough roads. Not only did the actual effort of cycling hurt but the road surface was also beating you up. My aim was to push as hard as possible to get some kind of gauge on what my fitness is for the 70.3M race in three weeks. I certainly did push hard (or it felt like it anyway) and my laps time were surprisingly consistent with the middle two laps being slightly quicker than the 1st and 4th. Due to the nature of the course and the rough roads, the overall speed wasn't exactly "white-hot" at 21.6 MPH but it was 7th quickest in AG and 41st overall. 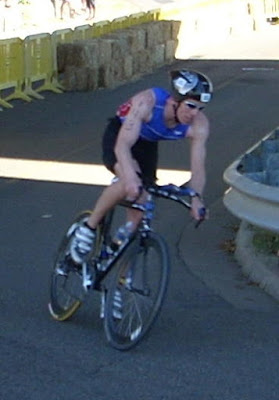 With the bike done in 2hrs 11mins and 3hrs 6mins gone in the race, it was "only" the 2nd run and 7.5km remaining. Now this is where duathlon gets real tough and everything can fall apart and in a hurry.....the legs have already blitzed 15km and then cycled for over 2 hours and now they need to drag a tired body around for another 7.5km (4.66miles). Running out of transition I didn't feel too bad and it was nice to free-fall down the hill towards the canal. 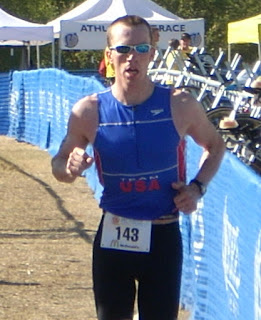 However, with all downhills you eventually have to head back up and on the small loop to the bridge the legs began to feel decidedly heavy! I felt that I was running so slowly and was hoping that some liquids at the aid station would help somewhat.....they didn't. So with about 6km left in the race I felt as though I was hanging on and hoping not to completely fall apart and get the dreaded "bonk" that can make you walk home. Fortunately, although feeling real slow and seemingly hanging on, I was still "plodding" along and was able to keep moving. Knowing that the 2nd run was relatively "short" helped, and I even managed to pass some people. The final hill was negotiated and then it was the final 100 meters into the finish area......just about breaking 3hrs 40mins for 7th in AG and 28th overall (out of 350 racers). 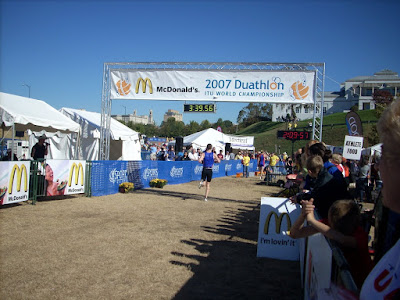 Looking back at my 2nd run time, it was no-where near as bad as I felt and I was still able to bash out 6:51min/miles. I think that the 2nd run of a duathlon always feels slower that it really is because it is relative to the 1st run which is as fast as your usual stand alone running race pace.

Overall the race was great and I am pleased to finish 7th in AG and 28th overall....perhaps I should do more Duathlon's! (I will be back in Richmond in April for the Duathlon Nationals). So not only was it a cool race but the day was a huge training effort before Clearwater and that's the big goal for the end-of-season. Two more weeks of hard training before the taper and 70.3M race and then I'm done for the season.....then we start looking forward to next season!
Posted by Iain Banks at Tuesday, October 23, 2007

Great race report!! You managed to capture the essence of the race very well. Tough race on a tough course. Looking forward to some smoother roads in Florida. Congratulations.