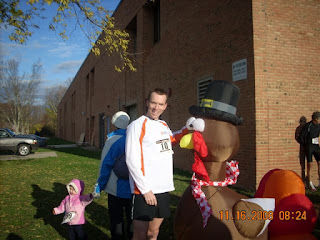 Me and the Turkey!

As is tradition the race season well and truly ended this past Sunday at the Annapolis Striders annual Cold Turkey 10km. I had won this race for the past two years but standing on the start line I wasn't exactly expecting to get the 3-peat primarily due to:

a) my speed work has been lacking;

b) I was still pretty sore from a weights session on Saturday (not to mention the afternoon spent at Annapolis Mall!); and

c) Matt Fortin, who has won everything in sight this year, was also here. 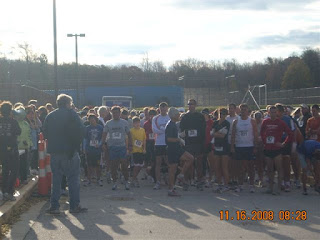 Chilling at the start (literally!)

The gun went and off went Fortin quickly followed by 15 year old Cody Vernon. I settled into 4th but after the loop in the School pushed into 3rd and tried to keep the leaders close. Unfortunately there were not any mile markers out this year and so it wasn't until the course turn-around (the course is an out and back) that I would get any idea of the pace. 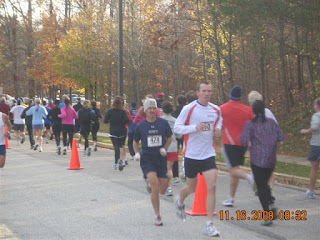 I was feeling quite good although couldn't keep the top 2 close and therefore was determined to keep 3rd. Hitting the hills between miles 2-4 I was alone in 3rd and after the turnaround had a gap of about 35 seconds over 4th. I was a similar distance behind 2nd place. I also calculated that I was at about 5mins 50secs miles and with downhills over the majority of the last two miles, I was aiming for under 36mins.

The earlier hills must have taken their toll on 4th and 5th place as the gap grew on the downhills and I was able to roll into the finish.....although I did try to sprint to the tape to try to get under 35mins 30secs. I was just outside at 35mins 31secs, but it was a new PB for the 10km. Matt Fortin took the win in 33mins 18secs, with 2nd being at 34mins 27secs. 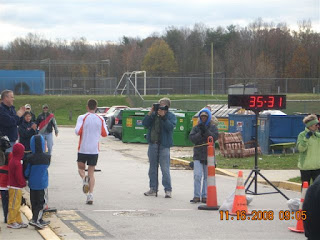 That was the good news, the bad news is that there was no frozen turkey as a prize this year. You have to be first overall or first in Age Group to get the turkey, being 3rd overall I was ineligible for AG prizes.

So far I am one week into the off-season, three to go and then the training for next season will kick in again. I might jump into a couple of running races over the next few weeks but it will be on a spur of the moment kinda thing....other than that workouts will just be random with little structure and just for fun. 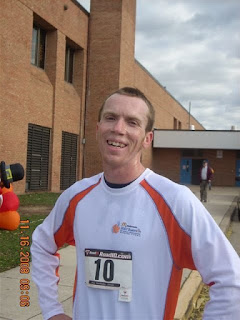 Yeah, now you can blow the leaves!!! YAH! WOOHOO to the end of the season.