Things aren't always as expected and this was certainly one of those times. While down in Florida my parents managed to get to a couple of Tampa Bay Lightning games, unfortunately the team were not at home when Sarah and I were in town. Anyway the second game that they went to was against the reigning Stanley Cup Champs the Detroit Red Wings...just goes to show how bad the Lightning are this year when you can walk up the day of the game against the Red Wings and still get cheap tickets! Not only did they get cheap tickets but it was also Mike Smith Bobblehead night, what more could you ask for other than a Barry Melrose mullet night?

My parents willingly accepted two bobbleheads with the arrangements already made to send one to Maryland where it would sit with the rest of the Bowie Bobblehead collection.

Just a few days later Sarah and I had made plans with a few friends to see the Capitals put a beat down on the New Jersey Devils. Yet again another bobblehead night and none other than 2007-2008 Jack Adams Award Winner (and Slapshot extra!) and Capitals Head Honcho Bruce Boudreau....sweet two new bobbleheads to go into the collection in just a matter of days!

So yesterday in the post Mike Smith arrived, in what seemed like a rather small package for a bobblehead....much to our surprise (and for my parents when they received it) this is what we got! 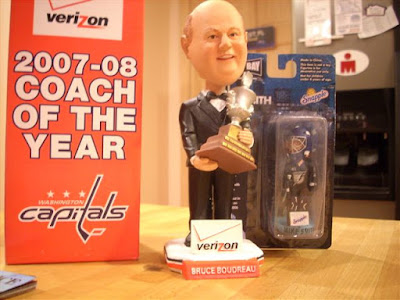 LOOK AT THE SIZE OF MIKE COMPARED TO COACH! I think Tampa Bay need to rethink their marketing and blatantly advertise that it would be a weeny Mike Smith....to be honest I bet Mike Smith himself is probably a bit disappointed with the outcome! It's a little embarrassing to be put up against all the regular size bobbleheads so he might just be kept out back in Coach B's shadow :-)
Posted by Iain Banks at Thursday, November 20, 2008