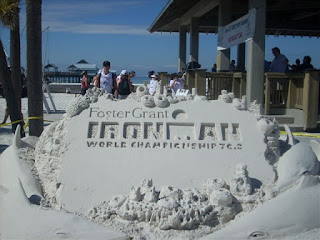 Time for the last triathlon of the season and so what better way to finish off than with the World Championships over the 70.3M distance. Besides it was a good excuse to head south for a final few days of warmth before the winter temperatures of the Mid-Atlantic kicked in!

The goal going into the race was to set a personal best and put the "bad" run of last year behind me. Thursday and Friday were just chilling days and putting in some small workouts along with every other pointy headed triathlete along Gulf Boulevard...that's partially the trouble with Clearwater Beach, there aren't many places to ride! We managed to head to some of the usual haunts of the North Redington Beach area such as the Suncoast Seabird Sanctuary and Bad Ass Coffee Company....oh yeah and we met up with Team Banks who had already been sunning themselves in Florida for the past 10 days!

Race morning came along pretty quickly and luckily the 30-34 wave was at 7:10am. Last year I was in the final wave and it seemed like an age that we had to wait around. Going earlier in the day also meant that we would be out front of the rest of the field and hopefully away from the distinct "packs" that can form on the pancake flat bike course. 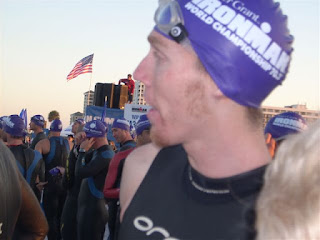 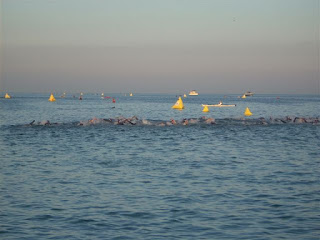 Beach starts are always cool and this one was no different and we all piled into the water with the cannon ringing in our ears. The swim was as it always is...a bit of a fist fight to start with and then a slight calming down before we catch the racers in the waves in front and you have to negotiate traffic. Although I didn't feel like I had a great swim I came out in just under 30mins and felt as though I hadn't wasted much energy (perhaps I should swim harder!). T1 was a blur and the main thoughts were trying not to slip on the wet ground while running with cleats to the bike mount line (particularly not in front of Team Banks....that would not be cool!).

Knowing the bike course from 2007 was a definite help and with weather conditions relatively similar to last year it was good to know where the wind would be coming from and where the windier sections would be. It was also good to be in the first of the waves as the road ahead was pretty clear and we didn't have hundreds of other racers to contend with. The first hour on the bike went to plan, pushing along at 24MPH and making sure the nutrition plan was to schedule (drink every 15mins and a gel every 30mins). The wind was light all day and so the bike section was a steady effort the whole course.....no major headwinds or tailwinds to speak of.

I was still feeling comfortable at mile 40 and knew that I had a 24MPH ride on the books. Trouble was I had been joined by about eight others from my age-group and despite trying to surge to get rid of the them, they just hung onto my rear wheel. Fortunately the group actually worked legal (i.e. not drafting) for the main part and for the final 15miles I was either trying to get away from them (didn't work!) or was hanging off the back conserving some energy for the run. Many people complain about drafting at this race and later on while on the run course as other riders were coming into T2 I saw some pretty large packs but the guys I was with for the final miles seemed to be doing the right thing and keeping the legal distance. With some 20minutes to go before the run I popped down a pack of my new favorite race foods....Fruit Punch Jelly Belly Beans and begun to think about the run. Coming into T2 I saw Team Banks and I had a 2hr 21mins bike split, ever so slightly slower than last year. I think I could have gone faster in those final 15miles but I didn't want to just pull the rest of the guys along particularly as they were in my age group and so it was a calculated effort to get me into T2 ready to run away from them. 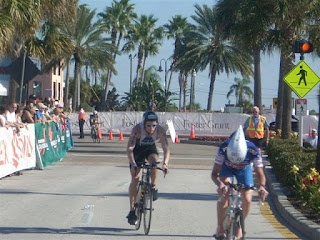 T2 went well and my right bike shoe finally stayed on the bike after the last few races when it kept being flicked off as I dismounted (that's what a little bit of tightening will do!). I came out of T2 like I had stolen something and went through the first mile in 5mins 40secs. Realising that I had started like that last year and then suffered from some stomach issues, I begun to control the pace a bit more and tried to keep at about 6min/miles. The only trouble with that was the 12% climb up and over the Memorial Causeway just before mile 2 but that went well and I knew I had my running legs with me. If you have read my previous race reports from this season you'll know that the run has been without a doubt my strongest portion of the races this year. 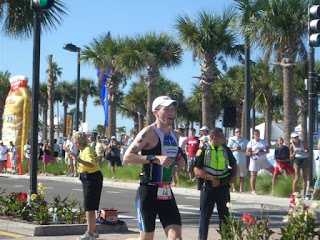 The first lap (6.5miles) was perhaps the best I have felt all year in a triathlon and I was consistently at about 6mins 10sec pace. I had my first gel on the run at mile 6 and clocked about 40 minutes for the first lap. At this point I had 43 minutes to get under 4hrs 20mins and a new personal best....it would be close but certainly do-able. Just before the 2nd lap I also saw Kerri heading out onto the run course, unfortunately she was to struggle later on in the run after what looked like a promising finishing time.

On the 2nd lap the miles seemed to be getting further and further apart....had someone moved the mile markers? It wasn't too bad though and it was only about 6mins 30 secs between them. Knowing that I only had one more ascent of the bridge certainly helped and I was also aware that my current pace would get me a new PB for the 70.3M distance....motivation if you ever needed it! The only real trouble I had (aside from general fatigue!) was at about mile 8-10 when I felt as though a stitch was forming every time I had a drink. Luckily this kinda passed after some deeper breaths but would come back at the next aid station after a drink. 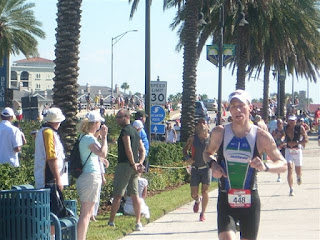 So with only a couple of miles to go I needed to keep my 6min 20sec pace to get in under the 4hrs 20mins time and a great end to the season. Coming into the traffic circle and along the finish straight with a slight increase in tempo I crossed the line in 4hrs 19mins 13secs....a 5 minute PB and last years race demons put to rest. 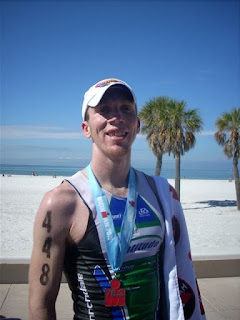 Just as a side note, if you have never heard of Dick and Rick Hoyt, take a look at the Team Hoyt website. Once again they were racing at Clearwater and no matter how many times I see them it never loses it magic. I first watched an Ironman on TV in 1999 and it was the World Championships from Kona when the Hoyts completed the race. It really inspired me then and still does 10 years later when I get to compete in the same races with them.
Posted by Iain Banks at Wednesday, November 12, 2008