I don't generally do much road racing as they typically fall on many of the same days as triathlons, duathlons or running races. I also don't do too many as the lower categories (such as the Cat 4 that I race in) are certainly a health hazard....this past Saturday was a prime example of such hazards. My race was a joint Cat 4/5 race, had a field of 75 racers (34 Cat 4 and 41 Cat 5) and was a five lap race of the eight mile course.

The course itself consists of a nice stair climb and then a few rolling sections before the two mile "sprint" for the finish line. As is the norm at Walkersville the wind was howling and on the roll-out to the course it was obvious that there were a few jittery people out there (commonly referred to as Squirrels). For most, Walkersville is the first race of the year and within a Cat 4/5 field, sometimes the first race ever!

After a few screeches of the brakes and a gentle roll-out the pace rapidly increased as we were onto the course proper and the thoughts quickly turned to "Lets go racing Boys" (The inner NASCAR fan in me coming out). At the stair climb the pace dropped, everyone got their collective breaths and pretty much rode tempo...we still had 39miles to go, plenty of time to get the lactate threshold training in!

Or so I thought....immediately after the turn, at the top of the climb the sound of metal and bodies onto pavement was heard and the pack split in front of me. Fortunately I didn't get brought down with the crash but a gap opened up and after avoiding a few bodies on the ground the gap had to be closed otherwise it was race over. Above threshold riding was called for and it was only 5 minutes into the race, not a great start or omen for the rest of the race.

With the help of a few other riders I made it back into the main group after a short while and then tried to survey the damage that the crash had caused. Of the 75 rider field we were probably down to less than 50 riders and we hadn't even done half a lap yet. From this point on the race took on the usual shenanigans of a Cat 4/5 race with a few short lived attacks off the front and general pace of about 24 MPH. Unfortunately it was on the stair climb on the second lap that I also realised that I was the sole remaining ABRT/Team Latitude rider and was surrounded by other teams with more than a couple of riders....I'll think I'll just sit in and see what happens then! 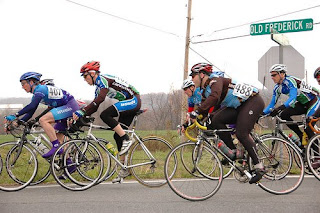 Photo Courtesy of Sue Estes (ABRT Teammate) thats me in the red helmet with knee warmers!

The rest of the race was to put it plainly a great threshold workout, holding 24MPH for the remaining laps and focusing on staying in the right position, not being in the wind. Unfortunately a front group of about 8 had formed when a few riders here or there had gone off the front and teams blocked to allow them to get away. The second group that I was in remained about 20 seconds back for much of the last two laps. I went off the front for a brief solo to see if it would jolt the rest of the group, which was now down to 12 riders into forming a chase. Much to my dismay they didn't seem interested particularly as they had riders in the front group.

On the last lap just to spice things up even further, a guy in our group must have lost concentration, ran off the road onto the gravel shoulder and promptly went down taking another rider with him...again I was fortunate to avoid him and it left just 1o remaining in our group and the 8 out front. And what did that mean? The chance for more points in the final sprint (The top 15 get points towards the BAR Series).

Coming into the final mile we were still about 20secs behind the front group and with no chance to catch them everyone was waiting for the sprint. Now I am not one to take chances in most bunch sprints but when there is only 10 of you, I thought I might as well have a go....my sprints are poor to say the least but I ended up about 5th in our group and good enough for 13th overall and a few series points.

Overall the race was a great workout and it's always nice to get out for the occasional road race. I'm not sure when my next one will be this season but it certainly won't be until after Eagleman on June 8th....can't risk any crashes before then!
Posted by Iain Banks at Tuesday, April 08, 2008