If you hadn't had guessed from my recent posts, this past Saturday at the National Marathon was my first "A" race of the year and my first ever standalone marathon. The packet pickup on Friday evening took all of 5 minutes with another 5 seconds to look in the "goodie" bag that contained a solitary finisher shirt and that was it...nothing else, just a bag and shirt, no gels, no flyers....zippy, nuttin, not much of a goodie bag! Anyway that was a minor thing and so we were quickly back home and heading to bed awaiting the 5AM alarm.

Before too long we were at RFK Stadium, in the pitch dark, and keeping warm in the car as the temps were hovering just above freezing. With 30minutes to the start we headed over to the stadium and the sun began to make an appearance and try to warm us up. The forecast called for sunny, clear skies but only a morning high in the mid-40's....good job I remembered the gloves! After a 15minute wait in the line for the toilets and see not being able to see the front of the queue I decided that I better get to the start line and near to the front.

The race had set up some corral areas based upon your expected pace and perhaps expectantly I had written down 5:30-6:15min pace....just behind the elite runners then! With only 5 minutes to go to the start, my corral headed up right behind the elite runners and so now I was just 5th row back....should I really be here? I didn't really have a race strategy, I was literally just going to wing it and go purely on feel. As I previously mentioned the main goal was under 3 hours and I would be pleased to get 2hr 50mins or so.... 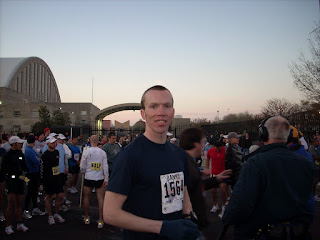 Just after 7:00AM the gun went and with seeing Sarah and waving, I was off and onto the streets of D.C. The first two miles just flew by at 6:08 and 5:53 and I was feeling great. The pace didn't seem too high and I was comfortable.....the recovery week had obviously done the trick and gotten me to the start line with fresh legs. Heading onto the Mall at Constitution Avenue also saw miles three and four in 5:42 and 6:03 (times courtesy of the Garmin!). It's probably worth noting that there was also a half-marathon that went at the same time and so I was trying to make sure that I didn't "race" them as I had the second 13.1 to go. The first hills came between miles 5-7 as we headed away from the Mall into northwest D.C. At mile 5 I saw Sarah for the first time out on the course, as she darted here and there on the Metro.

Going through the 10km mark at 38:08 was surprising but I was still feeling good and was comfortable with the pace. I was with a small group of half-marathon runners and they were setting a good pace. Without doubt the best part of the course was between mile 7 and 8 when we went past Howard University....the marching band, cheerleaders and "spirit squads" were out in force and made that area really special (and loud!).

Heading back towards RFK stadium for completion of the first 13.1miles I knew there wasn't anymore hills and so passing through the 10mile mark at 1hr 1min (just 45secs outside my 10mile best) the pace had pretty much remained stable at just over 6min miles. As such coming around the stadium I had completed the first half in just about 1hr 19mins 56secs(a half marathon best by 2secs!) and I realised that if I could at least not hit any kind of walls in the second 13.1m I could be close to 2hrs 45mins and certainly under 2hrs 50mins..... I saw Sarah again at mile 14 and it was at that point that I was told I was in 12th place overall.....

Unfortunately I missed Sarah at mile 18 and it was then that the course headed into the south half of D.C. and I knew that this was the point that might bring some problems. My longest training runs had only been 18miles in length and about 2hour durations...I was going slightly into the unknown and as I passed the new Nationals ballpark heading over the Anacostia River I had just pushed out mile 19 in 5:51.

The next few miles were a bit desolate in the fact that there were not many runners about (a bit like the whole second half) and we were running along the shores of the river with no crowds (except the aid stations) and a relatively stiff breeze. It was also at this stage of the race that the legs began to revolt and in no uncertain terms stated that they were getting tired!

It's quite an odd sensation really, I felt as though I was slowing down and was struggling but the watch wasn't saying the same thing. Miles 20, 21, 22 and 23 were done in 6:00, 6:06, 6:14 and 6:09. I was now down to the final few miles and as had been the case for the past 10 miles I could still see 10th place just a few hundred meters up the road....the gap had remained pretty much the same for the whole second half.

Miles 24 and 25 brought some unwelcome rolling hills but at least you can see the stadium from across the river and you know that the finish line isn't too far away....you just keep thinking 15minutes left, 10minutes left, 5minutes left and before too long the stadium is at the end of East Capitol Street.....the road that you are on! The last mile was great not only could I still see 10th place but I could also see 9th place.....and 9th place was fading fast. My carrot for the 2nd half of the race went through into 9th and then with only less than half a mile to go I passed through into 10th place. It was then only the finishing straight to go....smile at Sarah for the picture and cross under the finish line....2hrs 41mins 49secs! (6:10min/mile) and 10th place overall (2nd age group) in my first marathon.

To be honest I still really can't believe how good I felt for the whole race and certainly surprised myself in the time that I did and placing that I got. It's a huge confidence booster as I head into triathlon season and lets hope that the running strength can translate into some strong triathlon runs. My legs are just about beginning to work again after being real stiff the past two days (even a gentle ride yesterday didn't ease them up that much) and the stomach is still feeling the effects of the pizza buffet on Saturday afternoon at Armands Pizza :-)
Posted by Iain Banks at Monday, March 31, 2008

(sorry about the comments screwup).

DAAAAANG Iain. YOU ROCKED IT!!!