Less than 24 hours till race day and everything is prepared. Just the packet pickup to go this evening. I had my final run this morning, just a short 10 minute run around the block to keep the legs from feeling heavy and dead tomorrow morning.

The image below shows the race course, which is essentially split into two half-marathon legs (north and south halves). The trouble with any race in the Nations Capital is that closing the roads isn't an easy task and so by splitting the course into two halves they can at least reopen the first half after only a few hours. 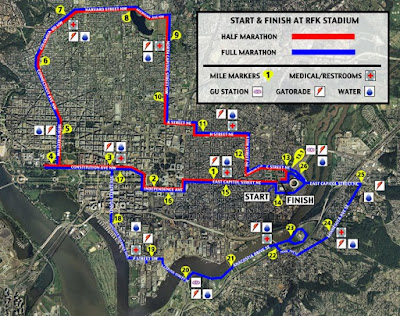 For me in particular the race route should be a great experience. Although I am based in Maryland with work as a Traffic Engineer/Planner, the majority of my projects are within Washington D.C and so I know almost every inch of the race course! It will certainly help to know the landmarks, where the hills will be and roughly how far along the route I am. It will also be amazing to run around the City with the roads open only to runners bearing in mind that I spend my work week figuring out how to keep the traffic moving!

With that in mind what kind of course does the marathon provide? Well, I will obviously have a much better knowledge as of Saturday afternoon! but the course is generally flat with four main rolling sections between miles 5-7, miles 11-12, miles 14-15 and just for fun miles 24-25. The primary hills are the section miles 5-7 where the race heads away from the National Mall and up into Northwest D.C. and the Dupont Circle area. Fortunately they come in the first quarter of the race and not later on where they would pose a much greater challenge.

So that's it until I next check in with a race report....with any luck I will be able to state that I had a good race and dipped in under 3 hours, we'll see!
Posted by Iain Banks at Friday, March 28, 2008