The final triathlon of the season is done and dusted, and what a race to finish with...the 70.3M World Championships. If you have read the previous post you will know my finishing time and overall placing. I was just slightly outside of my goal time but it was a good race nonetheless and certainly has given me food for thought as I head towards next season.

After registration on the Thursday I knew that our age group was in the last swim wave at 8:00am....this meant that despite our late start I still had to get up early and make sure that my transition was set-up and ready to rock by 6:45am, just before the first wave of pro women went into the water. Waiting for just over an hour for my start enabled us to watch the pro's exit the swim and head out onto the bike course. It also enabled me to have a warm-up swim (not that it was much of a warm-up, the water although not cold wasn't warm, tepid perhaps!). 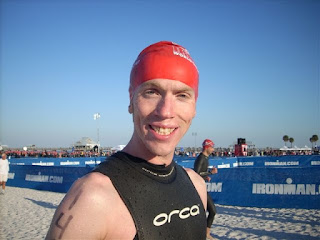 With it being the World Championships I knew that the caliber of the field would be high and that the swim start would be a crucial part of the race. The start certainly didn't disappoint and with a "Baywatch" style beach run to get to the water it was chaotic to say the least. A couple of guys to my right fell or tripped as they began and were simply trampled as they went down. I didn't hang around to see what happened but reports were that they eventually hobbled into the surf to start the swim. 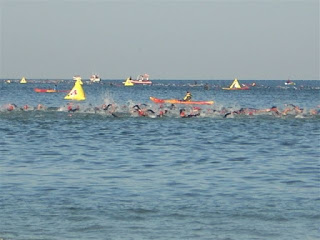 So once we got into the water all hell broke loose. This was without doubt the roughest swim I have ever taken part in and that includes Ironman Florida last year when 2500 people entered the water at the same time. There were about 210 people in our swim wave and with it being the World's there aren't a lot of weak swimmers. In total I think I got punched, kicked and slapped about 10 times and coming out of the water my goggles seemed embedded in my eye sockets (it is definitely a good move to put your goggles on underneath the swim cap). Despite getting hit many times I made sure that I got my own back and probably gave as good as I got. I ended up coming out of the water in 29mins 39secs, which I was pleased with. Swimming is my weakest facet of triathlon and will be a major part of the winter training schedule.

Transition 1 was a run up the beach, through the showers and after collecting my bike gear bag it was into the changing tents. Due to having to go into the tents and the relatively long run up the beach it made the T1 time quite long compared to usual. My T1 time was 3mins 40secs rather than a typical 2mins. However, before long I was out onto the bike and buzzing along. 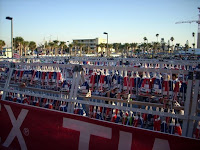 I was looking forward to the bike as the course and weather conditions were great. The only significant obstacle on the course was the short (but stiff...12% grade) climb of the Memorial Causeway as we headed away from the beach and into Pinellas County. Settling into a nice pace I headed through the first 20miles in 50mins and was passing a lot of racers from earlier waves. However, it was during this period that I had to make a major ethical decision. With the course being flat and fast and the high level of racing, there were many racers of relatively comparable ability and this lead to the creation of some large "pelotons" going around the course. A number of times I had blazed past some smaller groups and made a significant effort to separate myself from these racers, only to see them pass me while they latched onto the back of a much larger group of racers. And this is where the decision had to be made.....do I myself latch onto the back of the group and get a much easier ride to T2 (but risk the chance of getting a drafting penalty) or ride my own race, let the group go and then push along on my own. To me there was no real decision and as such I found myself letting the group go and pushing along on my own while riding legal and racing clean. 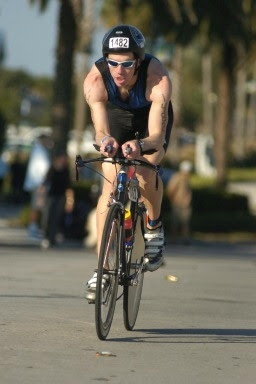 In the entire 56mile course I didn't see one referee and I have no idea whether any of the large packs were penalized. Despite those issues I had a great ride and even after heading into a stiff headwind through the last 10-15 miles I came into T2 after a 2hrs 20mins ride at just under 24MPH and a new personal best 1/2 ironman bike split. Of course I knew that the hard and fast bike would probably have some effect on my run time and I could have come into T2 much fresher had I followed on the back of the larger groups.

T2 was again slightly longer than usual due to having to go into the changing tents which probably added another minute or so to the overall time. Coming out onto the run course I was looking good to come in under 4hrs 30mins if I could push through. 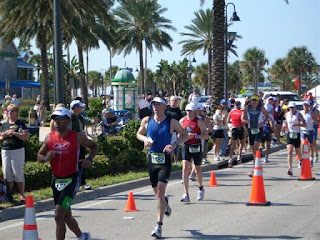 The first mile was great and was covered in a speedy 6mins 20mins. Leaving T2 it was through the streets of Clearwater Beach where the crowds were huge and it was good to see Team Banks (Sarah and Parents Banks and Toft). The run course was a two-lap affair and included two ascents of the Memorial Causeway (and its 12% grade) every lap. On the first descent of the Causeway I began to have some stomach issues which plagued me for the next 3 miles or so. This dramatically slowed me down and rather than concentrating on my running pace I had to make sure that my breathing was consistent and steady. This didn't bode well for the next 8-9 miles but fortunately the stomach issues relinquished somewhat, so much so that my 2nd lap of the course was faster than the 1st. Coming into the final 3 miles of the run I knew that I would be very close to get in under 4hrs 30mins. I also knew however, that I didn't have enough in me to go hell for leather for the last 3 miles to get in under that time. Gradually I began to increase the pace so that when I got into the last mile I stood an outside shot at the goal time. My final mile was run in 6mins 30secs but I crossed the line in 4hrs 30mins 27 secs, just 1 second outside my personal best and 27 seconds outside the goal. 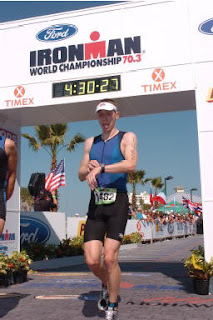 That time enabled me to finish 339th overall out of 1500 racers, good for the top 23%in the world and 63th in my age group (which just goes to show how strong and fast the 25-29 age group is, considering that many of the pro's were ahead of us). Overall the race was a great event and it was so cool to be at the World Championships. It was also a great race to end the season with as it gives me a ideal way to target training for the winter knowing what I need to do for the 2008 season (which will be upon us before we know it). Before then though I have a 4 week break where I will just "tick" over and generate the plan for the winter and the prospective race schedule for 2008.
Posted by Iain Banks at Friday, November 23, 2007