This is typically my last race of the season and it will be again this season. The cool thing about this 10km race is that it is usually a week or two after my last major triathlon of the season and so I should be in good form for it.

This year it was just a week after the 70.3M World's and after flying back from Florida on the Saturday evening it was at 8:30am on the Sunday morning (Nov 18th) that I found myself toeing the line trying to defend the 1st place that I had won last year. As an extra incentive Team Banks was still in attendance (and were staying through Thanksgiving) including my dad who had also entered the race.

Scanning the starting line I couldn't see the 2nd place finisher from the previous year (whom I had beaten out in a sprint over the last 200 meters!). So with that I was feeling good and as soon as the gun went I hit the front, happy to lead the field and set the pace. 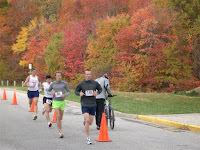 Going throught the first mile in about 5:30mins there was a small group consisting of about 4 guys, or rather it sounded like 4 guys as I was leading and I didn't want to turn round to see. The course is a straight out and back so I knew that if I didn't get passed I could see the rest of the field after the turnaround.

Mile 2 has a nice long drag of a climb along Route 2 and as this climb gradually continued the footsteps behind began to thin out and become a little more distant. I was out on my own and now the race was there for the taking, unless I bombed or someone blasted the last half, it was looking good.

Mile 2-4 are filled with some nice short, sharp hills and after the turnaround you get to do them again! It is good though as you get to see the rest of the field and at this point I estimated a nice 200 meter lead or so. I also managed to see my dad at this point who shouted out encouragement, which probably surprised many people around him, especially with the English accent!

From Mile 4 it really is the homeward stretch, you get a nice downhill along Route 2 until mile 5 and the final mile is just the blast into the South River School and to the finish. Coming into these final miles I still had a good 200 meter lead or so and was trying to finish in under 36 minutes. My PR was 35mins 55secs. At the turnaround point (3.1miles) I had posted 17mins 47secs and so a new PR was certainly a possibility.

Rounding the final corner into the home straight you can see the clock from about 200meters out and with a sprint I pushed home at 35mins 46secs for the win and a new PR. A great way to end the season and of particular importance, and the main reason to enter this race, is that the winner of the race (and of each age group) gets a frozen 14lb turkey! Nice it was too on Thanksgiving Day! 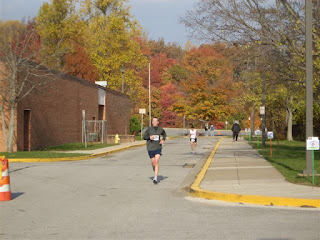 Just to finish off the race report, my dad came across the line in 50mins 40secs and a job well done, although no Turkey for winning his age group (which won't be mentioned!). 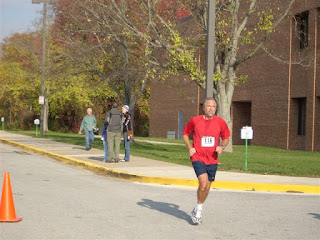 Although to be honest he appeared more interested to see if I had held my lead and won than in anything else! 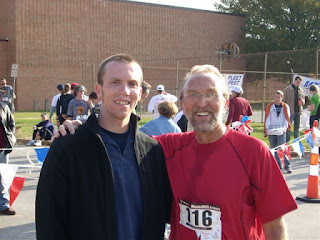