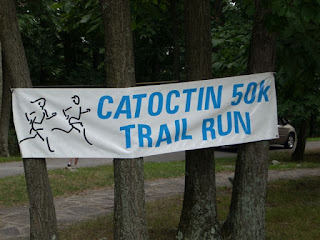 This race certainly did not disappoint and it was exactly as described on the tin (or website in this case). The race promised hot temperatures, high humidity, rocky trails and big hills, well it went four for four. In essence the race started earlier in the week with a short taper and prepping to make sure that I was fed and watered. The forecast for Saturday was high humidity and temperatures close to 100 degrees, everyone knew it was going to be a tough race and it probably showed in the starting field of 132 runners (154 had preregistered).

The race started at 8:00am and so Sarah and I ventured up to Frederick (about 70 miles away) the night before. Fortunately the start was only a few minutes away and therefore we didn't need to get up at a godforsaken hour. The course was an out and back through the Gambrill State Park, Cunningham Fall State Park and the City of Frederick Forest. The starting area sounded ominous, High Knob, and was at an elevation of 1,600FT.....high compared to Bowie (110FT). Walking up to the registration tent, the temps were already feeling high and the sun was out in full force.

With the weather forecast and the distances between aid stations I had decided to wear my Camelbak hydration pack, which allowed me to carry 50oz of fluids and it also enabled me to carry some food(Carbboom gels!) and the all important camera (which I had got on Friday evening). So with everything set in place and after a starting line briefing, we were off. 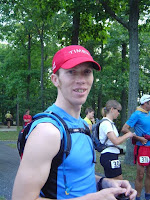 The first few hundred yards were just a lap around the parking area, which enabled people to spread out before hitting the singletrack trails that we would be on until arriving back at High Knob 31 miles later. 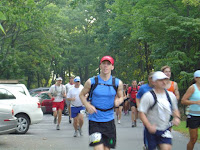 My goal for the race was simply to have a strong day and try to avoid the dreaded "death march" to the finish. From all accounts there is nothing worst than being 10 miles from the finish and simply having to walk after blowing up big time. We entered the trails and immediately hit the rocks, the rocks would be ever present for the next 50km and made for challenging trails, not only do you have to worry about running, you also need to plot your path in avoiding the largest rocks. The first few miles of Ultra's are always the most fun, as the field is still relatively compact and people are more willing to chat and joke.

The night before, Sarah and I had looked over the maps to check the locations of the aid stations and make sure that they were accessible for Sarah to get to. I had also given Sarah a rough estimate of arrival times at each station based upon a fast time and a slow time. Arriving into aid station 1 at 6 miles I was pretty much dead on for the slow time, 1hr 6mins. The course and heat was slowing everyone down. I refilled the Camelbak, took on some more gels and electrolyte tablets (salt) and was out again. Coming out of the aid station I was told I was in 19th place, about 10 minutes behind the leaders. I quickly overtook two runner's in front of me and they would be the last two runners that I would see for about the next 4 miles. In a way it is quite nice being able to run along in solitude on great trails and dictating your own pace, but there is always the nagging voice in your head wondering if you are headed in the right direction! It was at this point that I decided to try the new camera and take a few pic's out on the trail to show the rocks! 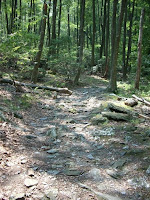 The second aid station was at mile 9 and so for those three miles it was a matter on concentrating on drinking, eating and taking the salt caps to keep the body in balance. The course was almost entirely shaded and so despite being in the mid-90's at least we weren't out in the blazing sun!

Unfortunately due to the aid station at mile 9 being along a private drive, Sarah couldn't meet me here and would next see me at aid station 3, which was the turnaround point. I got there in 1hr 38mins, which was only 32 mins after the 6 mile aid station and it was primarily due to that section being much less hilly. Once again I filled up the Camelbak, although the Gatorade from the station was not exactly cold, Sarah's supply was being kept cold in the ice-box! In just 9 miles I had gone through close to 100oz of fluids and we still had 22 miles to go. The next section was to be a long one to the turnaround point at 15.5 miles.

The section to the halfway point was a lot of fun, I overtook a couple of runners and so was in a solid 15th place. The course was still full of rocks and featured some significant climbing stints. However, the descent coming into the aid station fell from a high point of about 1,700FT to the station at 600FT. As you can imagine this was great and enabled you to fly into the aid station feeling good....as long as you didn't think about the fact that after turning around you then had to climb all the way back up the mountain! At this point I also began to see the leaders heading back up and estimated that I was probably about 25 mins behind them. I came into the halfway point in 2hrs 50mins and was still in 15th spot. Sarah, being the great one-person crew that she is, had me restocked and out again quickly (perhaps she didn't want to be with my sweaty, dusty body for too long) and I began to trek back up the mountain. 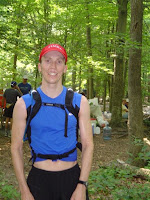 Trekking up the mountain, many runners were coming down and it was a succession of "good job", "keep it going" etc. The climb was brutal and took about 35mins or so of slow climbing to reach the top. The view once at the top was great though and was well worthy of a picture opportunity. 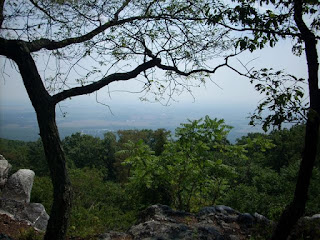 It was at this point that the legs began to tire and it really shows the limitations in my training to date. To be serious at ultra's I really need to do some longer runs over the 2 hour duration that I have been doing. However, trying to combine ultra training with triathlon training is quite difficult and with the World's coming up that is currently the main focus.

I certainly wasn't close to the death-march though and was able to keep on running at a good consistent pace. The climb and heat had made me finish the fluid in my pack and I hadn't yet come to the aid station at mile 22. Fortunately it wasn't too far along the trail and I was able to fill the pack again and down a few cups of iced water as well eat a semi-frozen popsicle! At mile 22 I had been running for 4 hrs 20 mins and was now into 14th place after passing a runner shortly before the aid station.

From the outward leg I knew that the trail between miles 22 and 25 were not as difficult as what the final 6 miles would be like and so managed to be consistent and run most of those miles. I did however fall for first time during the run and indicated further that I was getting tired. It was at the 25 mile aid station that I once again saw Sarah, over two hours since the turnaround. I could finally get some cold Gatorade and restock on gels. Leaving the aid station Sarah took this picture of me, pointing the way to go with 6 miles left. 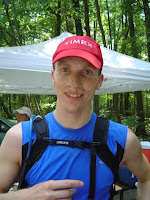 The last 6 miles are tough in this race, the trails are probably at their rockiest (is that a word?!) and a good proportion of the ground slants upwards. Combined with the previous 5hrs of running the heat really began to take its toll and at every stream crossing it was great to soak the hat in cold water to cool me down. If the water levels were much higher the urge to take a dip would have been huge. Those final 6 miles took me just over 1hr 20mins (compared to 1hr 6mins on the way out) and almost destroyed my quads. The pounding on the downhills on the quads in this race were massive and is compounded by the solid rocks as opposed to softer dirt trails. At the very end I'm not sure if I was running quicker uphill than downhill.

The good thing about the course being an out and back run is that you know how far you have to go and therefore you know when you are getting close to the finishing line. Some 6hrs 18mins after starting at High Knob I had returned and ended in 15th place, well pleased with my race and looking to the calender for when I can fit in the next Ultra. The winner, who had won a few 100 mile races already this year completed the course in 5hrs 20mins. The race conditions were probably the toughest that I had ever raced in, but the course certainly whetted my appetite for more Ultra's and I will definitely be back at this race next year. 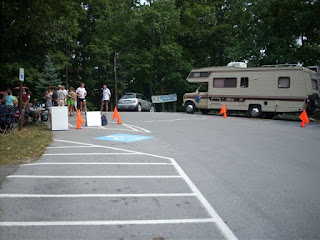