Update of the season so far...part 2 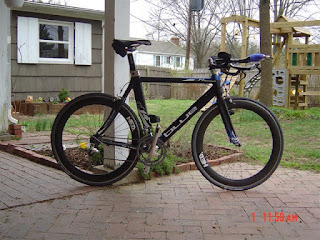 Well this year my "A" race is the 70.3 Eagleman triathlon. This race is a qualifier for the Ironman and 1/2 Ironman World Championships, in Hawaii and Clearwater respectively. I have an outside shot at getting a spot at either of this events and so I might as well give it my best. As preparation, I spent the winter months building a triathlon specific bike (any excuse to get a new bike) and planned the races that I would use as practice leading up to Eagleman on June 10.

The first race was a 1/2 Ironman event at the shores of Lake Anna, VA on April 21st. The swim portion was shortened from 1.2miles to 1500m due to the temperature of the water being a tad cold at 52 degrees.....perhaps I should have got a full wetsuit rather than a sleeveless!!! The swim was an experience I can tell and trying to get a wetsuit off in transition when you hands are numb is quite a challenge. Once it finally came off and my teeth had stopped chattering, I could put the new bike to work and see how fast a tri-bike really was. It was fast and felt much better than my road bike that I was previously using. However, Murphy's Law came into play and after my seat bag (with spare tube) falling off my bike on the first lap, I subsequently got a puncture on lap 2 (at mile 42) and that was the end of my race. Much to a surprised Sarah and Lisa I arrived back at the lake in a "sag-wagon". Onto race number 2 then...

This race was also a 1/2 Ironman and took place in Cedarville, New Jersey just a two weeks ago. It was a good race about 200 people I think started the 1/2 Iron but there was also the sprint field ahead of us with about 250 racers. One thing to note the morning of the race was an oppressive wind and a cool wind at that.....definitely a fleece and bodywarmer day. The swim was a little odd in that is was three laps of what would best be called a cesspit. It was actually Cedarville Lake but the water was grim particularly near the start/finish area and very marshy, I'm sure I stepped on a few dead bodies when getting out!!!! The swim went well although with it being so dirty it was impossible to see anything and so with the sprint wave (doing just one lap) ahead of us and then catching some 1/2 backmarkers I swam over a few people. The official split was about 29mins.

Out onto the bike and hoping that I wouldn't get any punctures :-) The bike was two loops and the first 7 miles of the loop was directly into the stiff headwind...some of the sprint people looked as though they weren't going to make it through the bike portion. The wind was strong enough that it was blowing people around including me and that was with only relatively small aero wheels (HED 60's). I had a good bike, unfortunately wasted about a minute when I had to have a courtesy break, perhaps I need to learn to go on the bike!!! No punctures or mechanicals and from my watch I reckon it was about 2hrs 28mins on the bike, a PB and with a strong wind!! Sarah calculated that I was about 15th coming off the bike. A quick transition and out onto my strongest part the run.

The run was a Y shaped run to make up the 13.1 miles and was primarily on roads through open farmland so the wind was either with you or against you. Started out strong and was picking up some places along the way. However, got to about mile 2 and my stomach begun to play up a bit, must have been some of the water that I swallowed from the cesspit. Thinking that it might go away I carried on pushing the pace and then going past mile 3 saw a porta potty, thank god. Didn't stop at this point as I knew that we would be coming back at this point at about mile 6, hopefully my stomach would cooperate and wait till then. On this out and back section I could see how many people were in front and at what time gaps...roughly 12-13th and not that far from those ahead. My stomach didn't get much better and mile 6 came just in time as I rushed to the porta-potty...no queue fortunately. At this point I was about 11th and came back out of the potty (about a minute later) just as 12/13 were passing. Quickly passed them again and now with the stomach unloaded was able to run and feel much better. Final half of the run was good and pulled enough people back in to come down the finish chute 7th finisher after passing 2 people in the final mile. Again from the watch a PB for a 1/2 iron run at 1hr 29mins (including potty time). So my final time was 4hrs 32mins 46secs and a PB by about 8mins. The official results put me in 10th as the last three people that I overtook were in the wave after me and so started about 2mins behind me......Still good enough to win my age group (30-34) and get a nice trophy. So a good second race, which hopefully puts me in good shape for the races to come. I have an Olympic Tri at Columbia this coming Sunday and then it will be 3 weeks before Eagleman over the Eastern Shore of Maryland.
Posted by Iain Banks at Monday, May 14, 2007