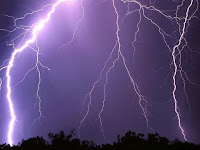 So tonight was suppose to be a good long run and to be honest I was actually looking forward to it. I don't always look forward to the long run, particularly during the hot, humid months of summer, but today I was and I had mentally prepared for it. So here I am looking out the window at the first thunderstorm of the season and all my preparation has gone out that same window. Instead of my planned long run it seems as though I am going to have to sweat it out in the gym on the treadmill instead. The treadmill is probably one of best and worst things every invented for the runner.....yes it allows you to run when the weather doesn't allow you outside but it has to be the most boring activity known to man. Even listening to the radio or watching the TV doesn't help, you just stay in the same place, sweating profusely wishing that you could actually feel the breeze outside as you move through time and space.

Not only do I dread the treadmill but the weather also makes me change the training schedule that I prepare for the week, and this week even more so with me having a race on Sunday. In any other week I would simply run long on the next day or the day after and substitute a swim in tonight. The triathlon on Sunday though doesn't allow me to do a long run on Friday as that would take too much out of the legs for the race. I guess I could go long tomorrow evening but I had already told Sarah that tomorrow evening would be a night off from training (Our new garden patio set needs to be collected from Lowes)....oh the best laid plans and all that. I'm off to the gym to have a go on the hamster wheel :-(
Posted by Iain Banks at Wednesday, May 16, 2007