Well Ironman St George was exactly what it stated to be, one heck of a tough race! All reports leading up to the race and even 6 months ago when I actually signed up for the race didn't sugarcoat how tough a race it is in St George.  Heat, hills.... more heat and hills and there you have it!

The build-up to the race was great, I felt prepared, had a decent training block through a very mild Winter and arrived in St George raring to go.  The first few days in St George were awesome with sunny skies and importantly winds out of the south to give us a tailwind up through Snow Canyon on race day.  The rest of Team Banks (Mr and Mrs Banks Snr had made the trip from home) had arrived and we were all prepared for race day.

Come race day morning the weather conditions were still looking great and the day's forecast was for much of the same....wait hold that thought for about 15mins as all hell was about to break loose. Entering the reservoir out at Sand Hollow State Park all was still calm, the cannon goes at 7:00am and I'm swimming comfortably close to the front of the pack with 1,500 other athletes. We make the first left turn after about 1200 meters and BOOM.....we hit swells out of nowhere, what the hell happened?  There are whitecaps, spray from the tops of waves and it's suddenly like an ocean swim.  As soon as the sun came up so did the winds and it was blowing a steady 20-25mph with 40mph gusts, so much for the calm forecast. Making forward progress suddenly came more difficult as we headed north into the waves (probably ranging from 2-4ft) and sighting the course buoys became a challenge in itself.  How glad was I that I had my Orca Sonar wetsuit to help me along!

Mentally conditions like this can be tough as you come out the water in a much slower time than anticipated but you have to tell yourself that the conditions are just as tough for everyone.....I exited in 1hr 10mins and immediately hoped that the winds would die down as they were going to make the 112 mile ride even more of a sufferfest. 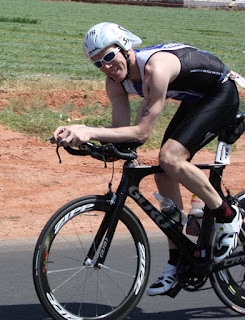 The winds didn't die down, they were there all day so for the bike course once we were out onto the loop, it was a matter of 30 miles uphill through the Canyon with a headwind and then 16miles downhill with a tailwind....unfair huh?  So as women's Pro winner Meredith Kessler stated it is probably the first race where the lowest speed was 6mph and the fastest 52mph!  Unfortunately the tailwind and downhill didn't make up for the slow speed up the Canyon.  The wheel choice on the Guru was ideal with a Zipp 404 and 1080.

On the good side the scenery was amazing and if you ever get to travel to Southern Utah make sure you visit the riding around St George!  The bike actually went pretty well, I hit all my power numbers and I felt good even if the speed wasn't there.  Hydration and nutrition was spot on with Carbo-Pro and Hammer Gels.

Getting back into St George was a relief and it was onto the town-based 3-lap run course.  With a 6hr 15mins bike split I knew I wasn't that close to the age group leaders and it was down to seeing how the legs were and how many places I could get back at the end of 26.2miles.  The temperatures were into the high 80's and after the first 8.5 mile lap it was getting close to a battle of attrition.  By the end of the day some 29% of the 1500 starters did not finish!  What really got me was the low humidity and dry heat, something that I had never trained or raced in before.  As soon as I drenched myself in water to keep cool, I was dry again.

After the first lap, the legs were definitely beginning to fade and the 2nd and 3rd laps were not overly pretty but they were consistent.  One of the important things during races of the Ironman length is that you generally have plenty of time to think and as you race the day's expectations and goals change on a constant basis.  By the time you cross the finish and the Voice of Ironman calls your name that once again "You are an Ironman", although you may be disappointed in the performance or time, you have had enough time to come to terms with it.

My thought process throughout the race pretty much followed this kind of approach:

7:00am Startline - Feel great lets get this done in sub 10hrs and qualify for Kona.
7:20am Swim - what the hell, where did the rain come from at least it's the same for everyone.
8:10am Swim - 1hr 10mins! Well considering the conditions I'll take that.
8:15am Bike - This is going to be hard with the headwinds, I;m pushing 350 watts just to go 17mph!
9:30am Bike - I'm going 17mph downhill and pedaling...damn these headwinds!
Noon Bike - I still have how far left?  Let's hope for an awesome run as sub-10hrs is out the window.
2:30pm Bike - Finally a tailwind back to town. Let's see where I am, reset the goals and go from there.
2:40pm Run - Sarah tells me I'm 23rd in AG, definitely no Kona this year.  Let's run well, where are all the other athletes on the run course, feels empty out here.
4:00pm Run - Jeez it's hot, ice, water, coke, yeah I'ii take it all....pace is falling and legs are way tired....aid station by aid station.
5:00pm Run - Well this sucks, I trained well, came all this way and here I am sucking! Let's enjoy the run.
6:00pm Run - Final lap, keep moving and aim for a sub-11:30....slowest ever Ironman :-(  Make sure no-one overtakes you.
6:30pm Finish - Enjoy the finish, high-fived Team Banks, good shout out from Mike Reilly. Done under 11:30....disappointed I let everyone down including myself but I gave it everything on perhaps the toughest IM course with tough weather conditions. Need some food and some chocolate milk!
6:45pm Finish - 108th overall, 18th AG, not what I wanted but in the top 100 amateurs. Perhaps it wasn't all bad.
Midnight - After watching the final finishers and hearing so much about the day, that only 1000 of 1500 starters finished, feeling better about my race.  I wonder if IM Louisville in August would be doable?