This race report is a bit late......life has got a bit crazy lately and social networking has been in the form of 140 characters or less! Anyway, for the Powerman Alabama race which combined as the Duathlon Long Course Nationals we took a road trip and spent a couple of days heading down to Birmingham, AL. First stop was Chattanooga, TN where we took in Ruby Falls and the famous Chattannoga Choo-Choo....Ruby Falls was really cool (you could do a wicked hill climb there!). Then it was onto Birmingham for the race. 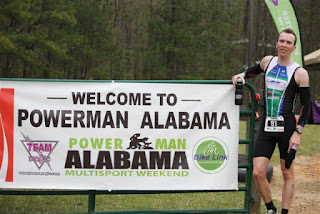 After registering on the Saturday, we took a look at the course.....wow! The run course was brutal and we had to do it twice the following day. It was essentially a bit of rolling hills, a massive steep uphill, a turnaround and a bomb downhill before the rolling hills again....a quadbuster for sure. The bike course was a 3-lap affair with some rolling hills but all-in-all a course that you could power through.

Race day came and the weather had cooled from the 80 degrees of Saturday and was almost perfect for racing. The under 40 men were the last wave to start meaning we had lots of rabbits in front many of which we would catch on the big hill! As expected the start was fast.....duathlon's are often much tougher than triathlons as the first run is generally just like running a flat 10km, pedal to the metal! 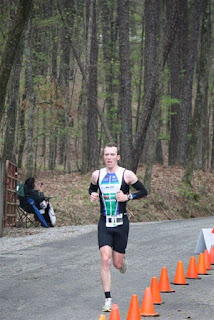 Things settled down a bit after the first rolling hills and then we hit the big hill, which was approximately 1.5miles long. I was running in around 4th/5th position and pushing just under a 6:00min/mile pace. It slowed on the hill but we all knew that the fun part was after the turnaround.......I more than made up for the pace slowing and bombed the downhill to get back under the 6:00min/mile pace and rolled into T1 with a 10km of 36:42 and was in 3rd place AG.

The bike was a 60km course with 3 laps and this was the first time using/racing with the powertap disc. The key was not to completely gas myself on the hills so having the power was critical for that. Not that 60km is a massive distance for pacing purposes but it was good to have the power feedback. I moved up to 2nd AG just after the 1st lap but was quickly overtaken by a couple of guys to sit in 4th for the remainder of the bike. Although I felt ok on the bike and I entered T2 in 4th, I didn't feel like I had a great bike. The two guys that passed me had flying bike splits and I need to work on that as the Spring progresses. 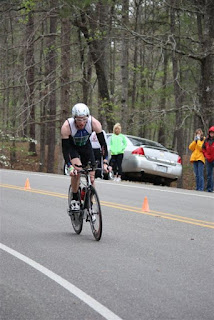 Heading out onto the final run, I wasn't looking forward to the hill too much but I actually felt ok apart from the cold feet! For the first mile I felt like I was running on stumps. Gradually they warmed up and I set about catching a few more guys in the overall placings. The guys in AG were running a similar pace and at the turnarounds I could see that I wasn't really catching them. It was a matter of holding onto 4th and placing as high overall as possible. The hill the 2nd time wasn't as pretty as the first time but it wasn't as bad as it could have been.....the downhill was still fun knowing that only 1.5miles was left! 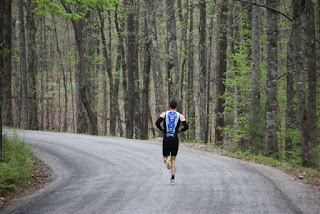 The final run was just over 40mins and overall it was a 3hrs 2mins for 4th in age group, 11th amateur and 15th overall (always good when you beat half the pro's!). It was a shame to be just off the podium at Nationals but at least I qualified for the Long Course Duathlon World Championships later in the year. Plus it was a good showing for the first race of the year.......more to come!

Oh yeah and it took about 4 days for the quads to feel normal again!
Posted by Iain Banks at Tuesday, April 19, 2011

I wanted to thank you for this good read!! I absolutely enjoyed every little bit of it.
I've got you bookmarked to check out new things you post…