Being a cyclist and growing up in a period of time when England had few, if any professional cyclist's of note, most of my cycling idol's as a teenager revolved around the likes of Stephen Roche, Robert Millar and Sean Kelly......not English but beggars can't be choosers! Then came along Chris Boardman who never really lived up to the hype of being a potential TdF winner after being so dominant on the track.......much in the same vein that Bradley Wiggins came onto the road. Wiggo has however, become the "Modfather" (see picture below) of British Cycling which is seeing a renaissance in procycling not seen since the heady days of the mid-80's.

The great thing about Wiggo is that he justified the hype by the 4th place in the 2009 TdF and is now looking to build Team Sky to be a contender again in 2011 (the tactic's of 2010 could be questioned)......It took him a while to get to the peak of 2009 but now he has a whole host of British riders to contend with in the pro peloton and that should give him some pretty good motivation for 2011.
So why am I talking about Wiggo and the state of British cycling in the pro peloton? Well, no particular reason it is just something that was running through my mind as I was reading a recent article about Wiggins in Procycling.......besides with a haircut like this how can you not give the man some props! 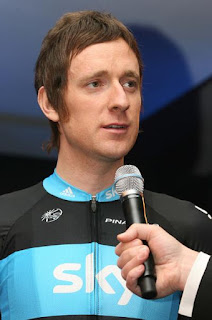 It will be interesting to see how the British contingent and the Team Sky program moves along in the next few years.......the likes of Geraint Thomas, Alex Dowsett, Matt Brammeier, Steve Cummings and Pete Kennaugh etc as well as the obvious such as Mark Cavendish, David Millar. As long as we don't see any repetition of this the future looks rosy!