Wow that was a different race. I've done this race twice before back in 2005 and again last year and use it primarily as a tune-up going into the IM of the season. This year was no different as it was exactly two weeks before IMLP.

Waking up on Saturday morning however, the weather didn't look good and the forecast was for severe thunderstorms in the area north of Baltimore. It was still raining when we got to the race site and with thunder rolling around, it was pretty obvious that we wouldn't be swimming. It was funny actually because when they did get round to announcing that the swim would be replaced by a 2.7mile run, some people went into transition, picked up their stuff and left for home. I know it was throwing it down with rain but if you have got up early and are at the race you might as well race!

So with slightly soggy socks we started in wave 1 for the 2.7 mile run and careened off down the path trying to avoid the massive puddles and get into a good position. At the turn around I was in 2nd and while trying to close the gap on 1st I managed to separate from the rest of the field. Coming into T1 I was 30secs off 1st and 20 secs in front of 3rd.

Now the bike was going to be rough, not only was the rain even harder, but this course is pretty technical with some steep downhill curves. Combined with a road surface that hadn't seen water in a few weeks I was going to take the course easy and give it plenty of respect. No point in laying it down for a tune-up race before the A race of the season.

Within the first 10 miles of the 27 mile course I was passed by two riders so I was riding in 4th when I came upon a T-intersection with two volunteers. Now I have raced here twice before and was thinking that it was a left turn but the volunteers weren't indicating any direction and so as I rode up I shouted "which way?". I promptly got directed to the right, odd I thought but they said so. A couple of minutes down the road I hit another T with a major road and no volunteers or police in sight! Dang, it must have been a left........as I hammered back past the volunteers I told them they had sent me the wrong way, they seemed pretty non-plussed about the whole thing.

For the next 30mins I just hammered the course and was passing everyone from wave 1 who I should have been in front of. I have no idea what some of the racers thought as I eventually entered T2 and was in 5th spot, I had made back all the places bar one. Now I had 5 miles to see how close I could get to the podium. I reckon I lost about 4mins from the detour! 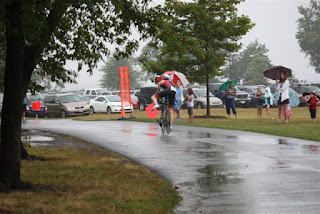 
The run was great, I was already soaked to the skin and so getting wetter didn't matter and there is always something refreshing about running in the rain (as long as it isn't cold!). Going through the turn-around I saw 1st-4th and knew that I probably couldn't catch them but I needed to make sure that no-one came up from the places beneath. Besides I also wanted to vanquish the demons from the last race at Eagleman when the running legs just disappeared. Good news....the running legs were there and I posted the 4th fastest run of the day with sub5:50min/miles (the first run was the 2nd fastest of the day at 5:10min/miles). 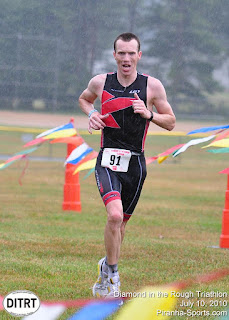 I ended up in 5th overall and 1st in the 30-34AG and was pleased with how the body felt racing again. Sure the fact that we didn't swim and that I was sent the wrong way was a bummer but it made the race interesting for sure and is just one of those things. At least it didn't happen at a bigger race :-) 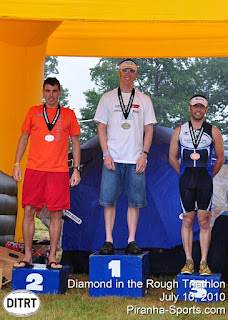