Sarah and I ventured westward to Pittsburgh this past weekend to take part in the inaugural Spirit of Pittsburgh 1/2 marathon. The race was Sunday so after battling the Beltway on a Friday night we spent a rainy Saturday chilling and seeing what Pittsburgh had to offer......I think we may have been looking in the wrong place but we didn't find that much so after looking around the South Side Works we headed for an early dinner and a movie ("Invention of Lying"....not bad, depends if you like Ricky Gervais, who fortunately I do). 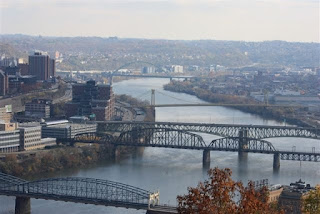 The race was the largest running race that I have ever done, with about 3,000 people. One of these days I need to do a big city marathon with 20,000+. My plan was just to go out hard and see how long I could last. I haven't been doing any long-distance training and have been doing shorter, harder efforts. I don't think that I have done more than 2 hours total weekly since before IM. Despite that I got onto the first row and acted confident amongst the studs!
The first 1/2 mile was just like a 100 yard sprint, I was rocking along at 5min/miles with the three leaders and then I came to my senses a bit. All power to the guys, if they can keep that up then they deserve to be leading. The leading guy did as well, he went and powered to a 1hr 6min finish at 5:03min/miles! I pulled it in a bit and went through 5km in 17:30 and at the 10km point in 36mins was running in about 15th. 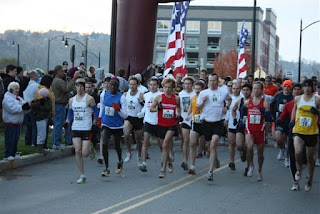 Past the halfway mark was when I started to struggle a bit and was wishing for the finish. The lack of distance training was showing and the short hills up and over the bridges were becoming tougher.....now I was running to try and get a PR and run sub-6min/mile pace for the whole race. A couple of guys gradually passed me over the next couple of miles but I managed a new 10mile PR when I went through in 59:50 (granted I have only done one official 10 miler).
Fortunately with the exception of Hot Metal Bridge at mile 13, the last three miles were relatively flat and I was able to finish 19th in a time of 1hr 18mins 34secs.......literally squeezing just under the 6min/mile pace and with a new PR for the half-marathon. I also ended up 2nd in age-group so overall was pretty pleased with the race. 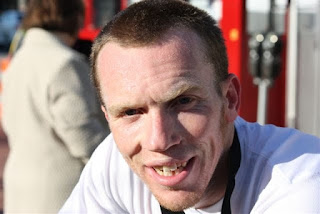 A new PR without any specific or targeted training bodes well for the coming base period and for some strong running next season. To end out the season I have a 10km on Nov 22nd (Cold Turkey 10km) and then probably not racing again until a spring half-marathon and marathon (any suggestions for a good March marathon?)
The journey home from Pittsburgh was great as we took US 30 rather than the Interstate, and this route took over Mount Ararat, through Bedford (home of Cannondale) and we also visited the United Flight 93 Memorial out in Shanksville, PA. It's a very informal memorial at the moment but it is very moving and somewhat eerie......just a small windy hilltop in the middle of of rural Pennsylvania. It is a NPS site, which has a ranger who details the lives of the 40 aboard and accounts for the events of that fateful morning. Perhaps it should stay that way, as on Nov 7th, they are actually breaking ground on a new and elaborate memorial.
Posted by Iain Banks at Tuesday, November 03, 2009