Time For a New Saddle....or Should I Say Seat?

The saddle on my tri bike has been in need of replacement and I had just been waiting till after Ironman to start looking around for a new one. There are lots of different brands and styles out there but one that has been catching on like wild-fire in the triathlon ranks is the Adamo seat from ISM (Ideal Saddle Modification). A few team-mates have been using this seat during the season and have nothing but good things to say about it. Other triathletes have also stated how comfortable it is for long-distance races (the pro's that use are from the pointy-end of the field).....everyone has agreed though, that it takes a while to get used to and that period may last anywhere from two weeks to two months.

I approached ISM and they were great in being able to support me for the 2010 season with the Adamo Road seat coming in the post a few days later. This weekend will be the first time out on the new seat (not saddle!). Although it will probably be on the trainer based on the current weather forecasts! The first few rides will no doubt be a series of stop and starts as I try to adjust the seat to get it located correctly. 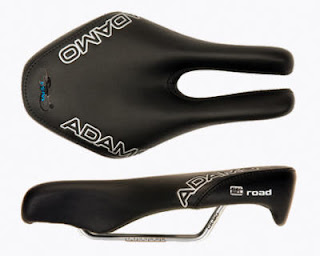 One of the major plus point to the Adamo seat is the potential health benefits, especially if you are spending the majority of your time in the aero position (like 112 miles at IM). There have been a number of studies regarding perineal blood flow and bicycle saddles, and ISM have tried to address this with the Adamo. Back in September 2006 ISM traveled to the University of Hamburg to have the Adamo Road saddle and the Adamo Racing saddle tested by noted German urologist Dr. Frank Sommer. At the conclusion of the testing Dr. Sommer was pleased with the results and congratulated ISM on their design and achievements. Dr. Sommer stated, "A saddle where there is hardly any blood loss. Which is excellent to preserve sexuality and for preventing erectile dysfunction." Excellent!
So over the next few weeks I will be tinkering with the new seat and getting used to the different dynamics and making sure that the blood flow isn't restricted :-) I'll let you know how it goes, the cycling that is!