Having the week off work prior to Columbia, I managed to get in a real solid training week and as was planned came into the race with no taper and was just training through it. Perhaps I should do that more often as it was polar opposites in terms of "race-feel" from the previous week at Devilman.

The weather wasn't great, a drizzle and windy, cold temps made the bike course slightly trickier than usual. No blasting around the corners on the slick surface but it was a good temperature for running....and running fast!

My race start was the 8th wave of the day (yep....over 1600 racers) and was at 7:39am. Water temps were about 70 degrees but with the rain and generally cold temps it felt chillier than that...the pro's swim wasn't wetsuit legal. As per usual the swim start was like bedlam and it took a little while to find open water. I never ever get used to the start of a tri when your lungs feel like they want to burst out of the wetsuit. For me the swim was business as usual. However much I swim and train, I always get out of the lake in 22mins and change. That put me into 15th in Age Group getting onto the bike.

At the start of the bike it rained hard but unlike at Devilman, I seemed to get into a pretty good rhythm from the get-go. I had decided to stick with the disc wheel despite the climbs on the course and was glad I did. It was good to be passing people and you always know that you are having a good day when no-one passes you. I ended up with the 4th best bike split in the age-group and coming into T2 was in 6th place.

The run at last week despite being 2nd best of the day was a bust by my high standards and I wanted to run well at Columbia. The run course is hard with a number of climbs and is really suited for the strong runners. Coming out of transition I felt great from the start. I was cranking along at 6min/mile pace and coming out of the park I seemed to get a second wind that enabled me to drop the hammer a bit more. I had no real idea of where I was in the race with the exception that I had one guy not that far behind me after passing him on the first climb. Not being funny but I knew that someone would have to be really rolling to be able to pass me on the run. Coming into the last couple of miles I couldn't really see anyone from my age group in front but all of a sudden coming up the last climb I saw one guy and not that far in front of him was another. I managed to pass the first and it was with only a half mile remaining that I passed the second guy. He tried to sprint past me up the last small rise but then died enough for me to regain the place in the last few hundred meters. 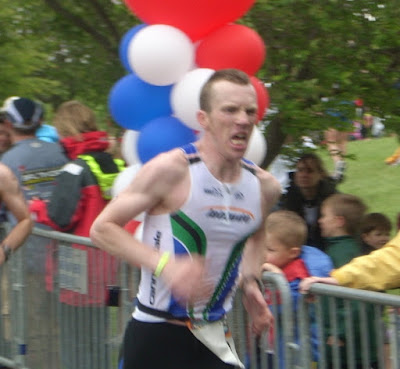 Pushing hard to the finish!

Final finishing time of 2hrs 10mins and 16secs (1 minute slower than last year...I blame the rain!) but importantly I had the fastest run time in my age group at 37mins 3secs and that was good enough for 15th fastest run of the entire race (including 25 pro racers). I was well chuffed with that....overall I came 26th (out of 1600) and was 2nd in my age group. 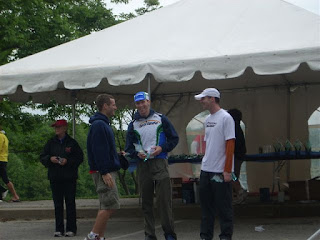 Dude - who cares about getting dropped on a training ride when you can pull off results like that! I am seriously impressed.