So the first road race of the year is over and done with and now the races come thick and fast. Not fancying the 3 hour drive on Sunday morning, Sarah and I headed down on Saturday afternoon. Unfortunately this meant missing all but the final 5 mins of the Terps womens win over Vanderbilt, but at least the final 5 mins were the most critical (yeah, yeah don't mention their meltdown against Louisville!). We got to the hotel and just chillaxed until meeting up with Ace, Tina, Ali, Greg and Randy and heading out to the Mellow Mushroom in downtown C-Ville. The students were out in force watching the College Bball and we saw more than a few guys and gals "yelling at their shoes!" after a long afternoon of drinking.

Sunday was a nice easy start as the Cat 4 race was the last of the day and we weren't rolling until 2:43pm. This gave us enough time to go get the pre-Jeff Cup ritual Waffle House brunch....nothing like a few cups of coffee, a sausage, egg and cheese Texas Melt and a pecan waffle to get you fueled for racing!

Although before hitting Waffle House we did have to take a picture of this....... 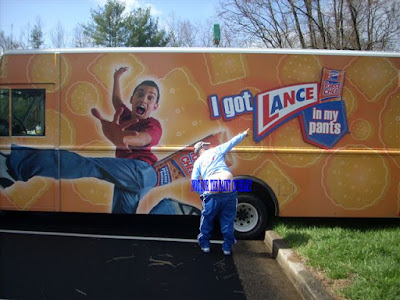 I don't think we stopped laughing until halfway through the race.....It was good to be back racing again as it was just my first race (apart from Tradezone) since Walkersville last year. It's going to take some time to get used to racing again and hopefully the speed and confidence will come as I race more. I managed to hit the front a couple of times and overall had a good workout finishing safely in the lead pack. Got to work on my overall speed but the strength was there....Walkersville up next!
Posted by Iain Banks at Tuesday, March 31, 2009