So with an early alarm call of 5:30am we were quickly on our way to the first race of the 2009 season and the winter wasn't conducive to fast times! The windchill was in the 20's and so trying to figure out what to wear was a key consideration. The final hour of a marathon can be brutal and it's not the time you want to start getting chilled and expending energy on trying to keep warm. In the end I think I got it just about right....geeky compression socks, windvest, gloves and hat! 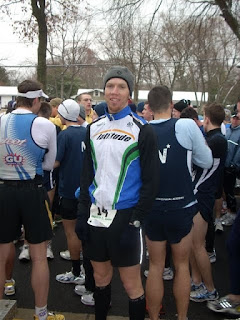 The start was at 7:30am and it appeared that the weather hadn't deterred many runners. The race had closed out on Feb 9th and we ended up with 590 finishers in the half-marathon and 570 finishers in the marathon...not bad considering there was snow on the ground and sleet in the air! With a misfiring airhorn we were off and running (both Sarah and I, as Sarah darted off to the car to get to the first vantage point!). The first few miles were spent in the first group, a couple of the half-marathon guys had gone off the front, but the next 10 places or so were in a group of which about 4 were marathoners. We were ticking along at just above 6min/mile pace and I was getting a little warm....perhaps the vest was too much! 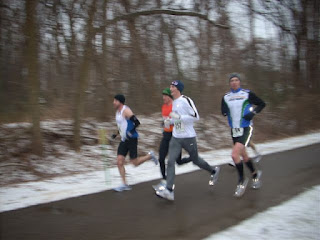 Around mile 6 the group begun to string out a little and the pace had slowed slightly. On the first out and back I counted that I was in 4th place and not that far behind the top three. I had settled in to a 6:15min/mile pace through 10 miles but by that time the cold weather had begun to make my right hamstring feel a little tight. As I have previously mentioned my long runs this winter had been few and far between and so I was a little nervous about the final 10 miles or so. Going through the half-way point in 1hr 22mins and change, I was wondering if that had been a little too quick and whether or not I would pay for it later on. Fortunately, I was seeing Sarah at regular intervals and with her cheering and shouting it was providing motivation and encouragement. I think she was being so enthusiastic to keep herself warm! After the half-way point runners were few and far between, I was still in 4th but 3rd had moved far enough ahead that I couldn't see them and I wasn't prepared to look behind!

After about mile 15 the weather felt as though it had gotten worse, it could have been me, but it was definitely feeling colder and the sleet had got heavier. Good job I had the windvest on and hadn't dropped it when I feeling warm earlier! Beyond mile 15 I had dropped the pace to about 6:30min/miles and was focusing on finishing under 2hrs 50mins. Coming to mile 18 was cool as the aid station was manned by the Annapolis Triathlon Club and I think it surprised Ashley when an ABRT jersey came running by begging for some Gatorade.

At mile 20 I was still in 4th but at the final turnaround I could see that 5th wasn't too far behind and that's when the fun and games began. Both hamstrings were feeling tight by mile 22 and coming up a small incline at mile 23 I dropped into 5th place. Fortunately I wasn't left for dead and kept within a hundred feet or so of 4th place.....a burst of energy at mile 24(which is a relative term at mile 24 of a marathon!) saw me close and retake 4th place. However, it wasn't to be and at mile 25 I was once again back in 5th place and that is where I would remain and finally finish. The back and forth in the last few miles had probably saved me from going over 2hr 50mins and as I crossed the line just 20secs or so after 4th place I stopped the clock at 2hrs 49mins 02secs for an average pace of 6:27min/miles. 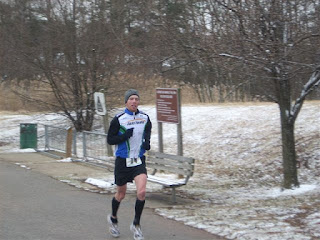 All in all a good first race of the year and a podium place as well. The conditions were challenging but that just makes it more rewarding when you finish!
Posted by Iain Banks at Tuesday, March 03, 2009