We were fortunate to have my parents over for the ChesapeakeMan race and they will also be combining the 70.3M Worlds down in Clearwater with a vacation in Florida. When they come over to visit from the UK they always try and take advantage of the things over here that they can't do or get in the UK. One such item is a good quality donut.... The British aren't known for their donuts and so places such as Dunkin Donuts and Krispy Kreme are held in high regard over the pond!

As such my parents often take the opportunity to visit one of the donut places in and around Bowie to satisfy their cravings that have manifested during their time away from the US. It was therefore not much of a surprise when we were in D.C one weekend, just prior to taking in a Capitals game that my dad came wandering back from the coffee stand in Union Station with this..... 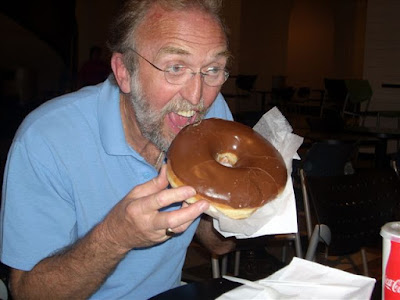 I think the store called it a "Dinosaur Donut" and claimed that they were the biggest in D.C.....my dad's excuse? "at $2.99 you couldn't afford not to!". In his defence though we did all eat some and were still able to take it home for dessert the following day.

It isn't hard to wonder why obesity rates are rising when you can get things like that!
Posted by Iain Banks at Saturday, October 25, 2008