It's the first week in September, which must mean that we are back in Newark, Delaware for the Diamondman 1/2 Ironman race. This is the 4th year that I have done this race and was in fact the first 1/2 I ever raced back in 2005. In a break from tradition we stayed in a different hotel and ate at a different restaurant (I would recommend Matilda's in Newark!) the night before the race.....it must have had an effect as the race turned out to be a good one.

Come race morning the remnants of Tropical Storm Hanna had well passed and there wasn't a cloud in the sky as the sun came up.....typical Diamondman weather! Fortunately after some negotiating with the local authorities the bike course had been changed back to 56 miles (it was down to 39 miles due to construction) with a 17mile duplication of the back part of the course. It did mean however, that the 1.25mile climb over the Reedy Point Bridge had to be climbed four times rather than the usual two. 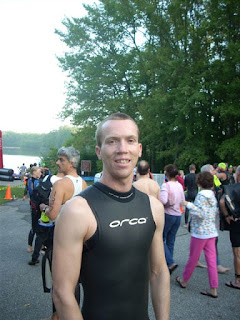 The swim went surprisingly well. Over the past three weeks due to vacation and the local pool being closed, I hadn't really swum that much and was feeling a little under prepared in that regard. I tried to push through the swim and came out in just over 28mins for the 14th fastest. Now came the long run (uphill as well!) to T1 before getting out onto the bike. The time for T1 including the run was about 4mins (official T1 was 1:33).

Off onto the bike and I made a conscious decision to be conservative and pace the bike evenly. I think in the past few races I have gone out to hard at the beginning and paid for it in the latter stages of the bike. As I came back past T1 after 10miles Sarah noted that I was in 7th place. The pacing felt good throughout the bike and even in the windier sections I was able to keep it steady and not push unnecessarily. A couple of guys did come through from behind and I was able to keep them in my sights for the remainder of the course and even catching them on the climbs on the Bridge. I think I must need to weigh a bit though as they put a few seconds in on the descents! Coming into T2 I was still in 9th and only a few seconds away from 7th and 8th. Final bike time was 2hrs 25mins (9th fastest bike split). 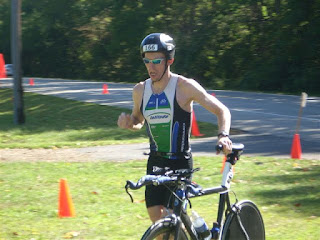 This is where things got confusing as I quickly got out on T2 in the days fastest change and could see one guy very close up the road. Just as I passed him though he stopped for a convenience break and then the road ahead was empty! The first mile is around the race site and so heading out to the main part of the run course I saw Sarah (wished her Happy Anniversary as we had both forgotten earlier in the day!) and set about seeing who I could catch ahead. At this point I assumed that I was in 7th or 8th! 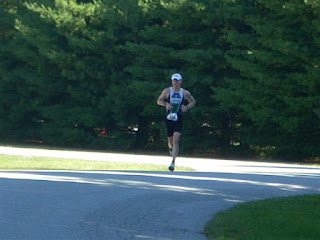 The run was great....I felt pretty good from the get-go and was pacing along at 6:10miles for the first few miles along the Canal Towpath. The trouble was I couldn't see anyone ahead and as such it was relatively lonely apart from a few fishermen and the scouts at the aid stations! As I was between mile 5 and 6 I came across the leaders heading back and the lead bike indicated that I was in 5th...great, stay in that position and it's an overall podium spot! Over the next mile I confirmed that I was in 5th (must have passed a few guys in T2) and guessed that I was about 3-4 minutes behind 3rd and 4th places. I made the turnaround in about 42minutes and also realised I had a sizable gap on 6th place.

Coming back the last few miles were getting tough and the two small climbs were feeling larger than they were. Throughout the return I was never able to see 4th place ahead and with a 44 minute return leg was able to finish in 4hrs 24mins 27secs and 5th place! In the end it was just over 2 mins behind 4th place and a further 30secs behind 3rd....The good news was that my run was the 2nd fastest of the day at 1hr 26mins 12secs. Kona legend Ken Glah took the overall win with 4hrs 13mins! 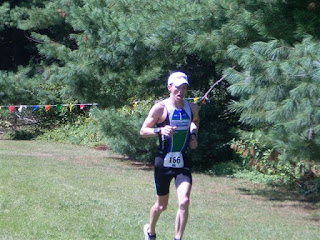 All in all a good race day and a great tune-up for ChesapeakeMan on September 27th. Just this week of hard training, a final 100 miler on the weekend and then we hit the two-week taper....bring on the ChesapeakeMan! 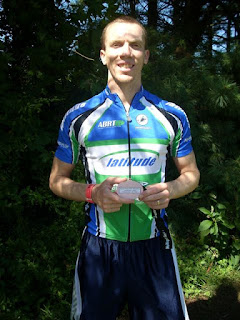