I don't think Kyle Busch has anything to worry about.....

Here's the NASCAR driving session blog...We have loads of pictures and video and I will update the post in the next few days with them........Now updated.

Last Saturday with the looming threat of a tropical storm blowing through the Eastern Shore we were in Dover, DE at the Dover International Speedway for a "Ride & Drive" session.....Now I am bit of a closet NASCAR fan and we go annually to the Nationwide (Re: Busch) Series race in September and so as a 30th Birthday gift Sarah arranged for the NASCAR driving session. The bad weather was predicted for late morning and fortunately our session began at 8:00AM and without a full quota of drivers it looked like we would all get to drive before the rain came. After signing in the drivers were separated from "hangers-on" as they were taken on a quick spin around the track in a mini-bus! It didn't hang about either.....

In another mini-bus the drivers were herded in and as we travelled around the 1.0 mile concrete track at 60MPH we had our "drivers meeting". Essentially we were shown the correct driving line through the corners and the straightaways being told not to follow the rubber lines that Mark Martin and Bobby Labonte had left from testing earlier in the week (I'm not sure that I really wanted to be 6 inches away from the wall anyway!). Quickly we were into the pit (reunited with "hangers-on") and got into the process of finding a suitably fitting driver suit and a crash helmet! 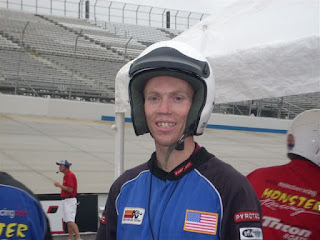 Although the weather wasn't sunny it was humid and damn hot in the suits....and with the cars being warmed up, Pit Lane was boiling! As I had a "Ride & Drive" session I was able to get four laps around the track after squeezing in through the window and into the passenger seat of the No.1 Joe Sanchez car and he didn't hang around. Being in the passenger seat was tough as a) you had nothing to hold on to; b) the force through the corners was trying to throw you out the car (anti-clockwise course); and c) the combination of a) and b) at 120 MPH was amazing!

Those four laps went by in a flash and after a few drivers had taken their 10 laps it was my turn to be let out onto the track on my own....well with one other car and the instructor's car as the lead. The No.60 car was a Toyota Camry (not that I have seen a Camry ever look like that on the streets of Bowie) and was a 4-speed manual transmission. 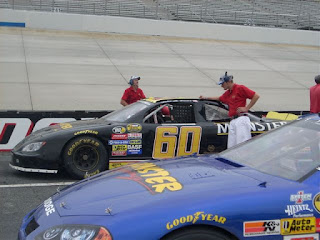 Tips on driving the Monster Mile, easy....into 1st for the initial 25 yards, into 2nd exiting Pit Lane, into 3rd approaching Turn 1 and into 4th exiting Turn 2.....then just gun it until you need to slow down in Pit Lane at the end of 10 laps, easy huh! No need to downshift at all not even in Pit Lane at the end, bring it in in 4th. Just as we were about to head out we got the last minute instructions of how to remove the wheel, turn the engine off and punch out the front window....just in case you know! So there I was exiting Turn 2, into 4th and pedal to the metal. Literally as well as these NASCAR's are built for pure speed and not for comfort or style....apart from the substantial roll-cage there isn't a lot in these cars. Oh yeah and don't bother looking for the speedo....there isn't one! The Dover track isn't a particularly hard track to drive but is quite demanding in that the straights are short and the corners long. The cars want to ride up the track (so would your car going 80MPH around a corner) and you have to fight to keep it through the racing line close to the apron (doing that for 400 laps in that heat would be a major effort!)....The instructor was obviously showing us the racing line and gradually increasing the pace as the laps went on. Without the speedometer in the car I have no real idea on how fast we were going but it was probably a lap average of about 80MPH and close to 90-100MPH on the straights.

The thing I found was that the speed felt much faster due to the forces on the car, the engine noise and the generally uncomfortable ride.....it was much like driving as a 17-year old in my 18-year old Ford Fiesta (yes the car was older than I was) at 50 MPH (the car wouldn't go much faster) in a desperate bid to get home from Sarah's house in time to meet curfew! The 10 laps seemed to go much too quickly and before long the checkered flag was out and I was rolling around into Pit Lane to end the session....this is when I found out that it was probably a good thing that I hadn't had to brake on the track. The cars aren't exactly fitted with the best brakes in the world and I had to stomp on the brake just to get it to stop in the correct pit stall!

Getting out the car I was sweating bullets and had only been driving for about 10 minutes, these Cup drivers must really be fit to drive the long races that they do (I'm not convinced how fit Tony Stewart is though if you look at him!) Overall the session was a great experience (the rain held off....just) and it is certainly something that I would love to do again someday.....what would I do differently now that I have done it once? Well I think that I would certainly trust the car more which would mean more speed....driving a NASCAR is so different to a normal car it takes more than 10 laps to really trust the car through the corners and get over the "I can't believe I'm doing 80MPH through a corner in a souped up tin-can" thoughts going through your head!....Next time :-)
Posted by Iain Banks at Friday, September 12, 2008