The weekend didn't exactly go to plan but it was a good weekend all the same. The 5-hour ride on Saturday was shortened to a 3-hour thrash in the afternoon due to some bad weather in Bowie during the morning. Although it did enable me to give the bike a much overdue clean and also time to clean out the garage which had been badly neglected.

After going to the cinema to see Mamma Mia (twice we have seen the story in a month! after seeing the stage show in D.C in late June) we hit the hay in preparation for the early start on Sunday. Fortunately the race wasn't too far away on the outskirts of Annapolis and an 8AM start time isn't too bad. Warming up before the race my legs felt dead, which wasn't really a surprise as for some reason my legs never feel the best right before a race. As such I just jogged around the track and tried to see who would be the main competitors....as expected the usual suspects from the Annapolis area races were there and so I knew the pace would be fast.

It's always amusing though that before the race you have what seems like hundreds of runners just zooming around looking as though they could qualify for the Olympics and yet when the race finishes they are struggling to come across the line. I would love to do a study on the relationship between looking fast in the warm-up and posting a fast time at local 10km races!

Anyway, dead on 8AM the horn sounded and off we were for a quick dash around the track before heading out for the remaining 7600 meters. 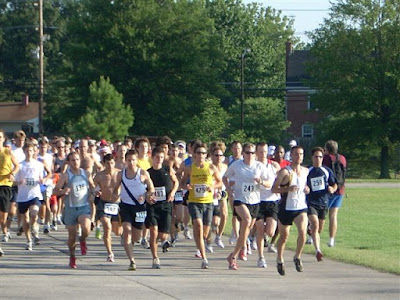 It's only a short race and so the race report will be short. The first mile was covered in 5:25mins and consisted of a mix of pavement and grass field, I lead for a brief stint before settling into third and trying to keep tabs on the lead two. The 2nd mile went past in 5:32mins and got us onto the trails for the first time although the majority of the race was still wet grass and the odd parking lot pavement! I'm not sure if the 3rd mile was long but I went through in 6:32mins and don't really know where the extra 60secs came from. There was one short hill but nothing really slow.....oh well. The front two had left me by this time and I was trying to keep them in sight and also trying to keep third spot. It wasn't to be though as two of the "usual suspects" came through just before mile 4 and began to power away. I was now holding 5th and wanted to keep it. Mile 4 was 5:45mins and we were heading back to the track, fortunately I had a large enough gap over 6th place as I don't think I would have had a decent sprint at the end. The final mile was covered in 5:45mins for a total of 29mins 25secs (just under two mins behind the winner)....5th place and 1st in Age Group. 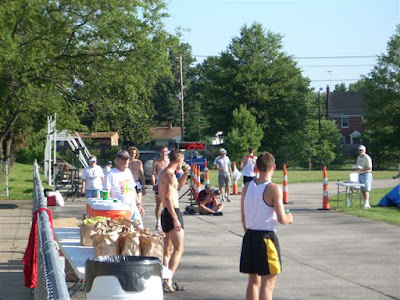 Overall I was pleased with the placing and the time as I hadn't really done any speed work in recent weeks and the cross-country nature of the course made a great change from pounding the pavement. All good fun! It does make me want to race a few more running events though and so I will probably not leave it 5 months until my next race!....and besides for winning the age group I won a 12-pack of soft drink :-)

Late in the afternoon I headed out for a 2.5hr ride and promptly got a puncture at the 1/2 way mark....same course that I got a puncture on two weeks ago! The Beltsville Agricultural Research Area must not like me :-(
Posted by Iain Banks at Monday, August 04, 2008