Just in time for the race on Sunday, Maryland is under the first "heatwave" of the year and temperatures are expected to soar into the 90's for the race. 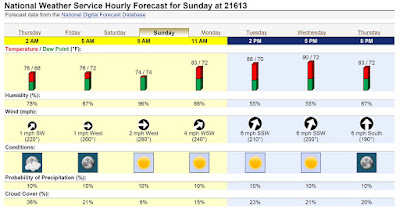 Now, during the summer this wouldn't necessarily be as much of a problem as it will be on Sunday, as most athletes would have been acclimatized for at least a few weeks....but this is the first real heat of the year and everyone has been enjoying the 60's and 70's. I guess on the bright side it could be windy as hell....pick your poison heat or wind!

The final tapering has gone well. The good luck charms are in place and just a few more need to be done. The list of good luck charms started this year after the Devilman race where a PR was posted! It's only a small list but it was continued through the Columbia race, which also led to a course PR

1) Attend a Bowie Baysox game in the week prior to the race (Went last night and they won in the bottom of the 10th!).

2) Watch the appropriate race of the Triple Crown.....this Saturday is the Belmont Stakes (The Derby was Devilman and The Preakness was Columbia).

4) Stop off at WAWA for a Mocha Mint Iced Coffee (fortunately there is a WAWA on the way to the Eastern Shore).

5) Sharpen up on my Alaskan Crab catching techniques by watching "The Deadliest Catch" the night before the race (This is always on Discovery Channel on Saturday nights so no problem there!).

So there we have it, the keys for success! Follow them and everything else is a piece of cake :-)

I can't wait for race day now and I feel like a bull in the stall, just waiting to UNLEASH THE FURY!
Posted by Iain Banks at Friday, June 06, 2008