The 2008 edition of the Eagleman 70.3M is in the books and will go down as one of the most brutal in race history. The weather forecast was spot on and the temperatures hit the mid 90's with the heat index way over 100....just the weather for a shadeless bike and run!

For me the weekend didn't start too well as I awoke on Saturday morning with a strained neck and could just about turn my head when I was speaking to people....not the ideal scenario when you need to bring your 'A' game to your 'A' race. Fortunately, with the aid of some painkillers and copious amounts of stretching the neck was not so bad by the time Sunday morning came around and didn't factor into my race.

As many of you are probably aware by now, Saturdays generally follow the exact same format for me prior to races and this Saturday was no different except the drive to the race was slightly shorter. After registration, we checked into the hotel, watched Big Brown lose the Triple Crown bid and headed out for dinner in Easton. All the while I was maintaining my fluid levels and as a result making multiple trips to the restrooms! Going to bed at 10PM the temperatures were still in the 80's...race day was going to be HOT!

And hot it was, even when we awoke at 4:30AM it was in the 70's. My race start was 7:08AM and we were the 4th wave of the day, we would be out front with the majority of people chasing after us! The water was just about wetsuit legal (for us amateurs, for the pro's it was a non-wetsuit swim) and as race director Robert Vigorito stated it was like a bath tub. The time seemed to fly by and after saying goodbye to Team Banks, I was in the bath tub and with only a few minutes until the start...would a trip to Hawaii be in the picture by the end of the day! 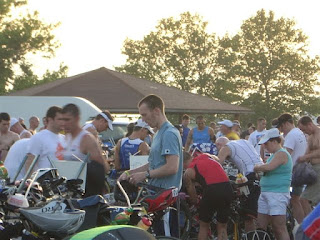 The swim started well, the water was calm and it was surprisingly not very aggressive in terms of getting hit/kicked/slapped etc. The neck fortunately was not causing me any problems and before long we were catching up with the previous waves. It was an odd swim really and I think that it must have been due to the currents in the Choptank River. The 'out' and 'across' leg seemed to take an age before we hit the final 'in' leg but yet we didn't seem to get much help from the current! I got out of the water in just over 30mins and wasn't exactly too pleased with that...Luckily Sarah had been counting the age group out of the water and I was out in 23th place. Not quite as bad as I had thought but some work to do to get anywhere near where I wanted/needed to be. 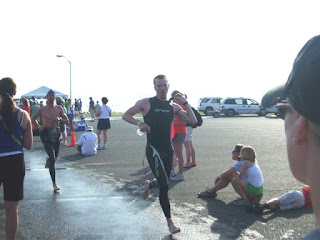 The bike started well and I was pushing along at 24-25MPH and passing plenty of people in the earlier waves and before long the road was becoming lonely with the field being pretty well spread. After about 40mins though, a nagging wind begun to kick in and I seemingly lost the 'snap, crackle & pop' that I had earlier and the rest of the ride became a bit of a struggle. For the first time in a long time my back started to stiffen up, which could well have been a side effect of the strained neck and I had to keep stretching. It wasn't all bad though as only a few guys from the later wave had passed me and I had maintained a positive gain of riders in my own age-group. I knew I wasn't going well but was hoping that everyone else was in the same boat and I realised that the run was going to the key to the whole race, especially with the temperatures and humidity rising as the day went on.

Finally coming off the bike I had a 2hrs 26mins split, slower than last year (by about 90 secs) and I wasn't in the best frame of mind as I ran out of transition. Sarah shouted that I was in 14th position (after making up 3 places in transition!) and asked how the bike had gone...I wasn't my usual happy self and responded with a grumpy shrug (and for that I am sorry, I didn't mean to be rude). I was now where I wanted to be, on the run and chasing people down. Within the first two miles I had climbed into 10th place and tried to keep the pace up at 6:25 min/miles, which is slow by usual standards but the heat was amazing! I was putting ice everywhere, under the cap, down the top, carrying it in my hands (which really does help to cool you down). The water stops gradually seemed to be getting further and further apart (they weren't, it just seemed like it!) and by mile 4 there were more than a few people just walking along....it was becoming a matter of finishing rather than racing. 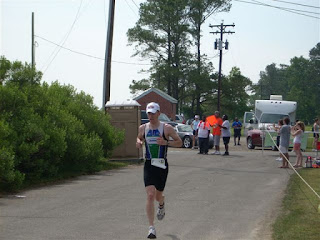 With the run being a pure battle of attrition I knew that if only I could keep moving and not give in to the urge to walk, I could probably gain a number of places. By the turnaround I was into 9th place but runners in front were few and far between......I was running water stop to water stop and was making sure to carry a cup of iced water between stops and that was a huge help. Just by keeping moving I was able to run at about 7:20min/miles. It was odd in that suddenly you would see runners ahead after not seeing them in the distance and then pass them as they either walked or slowly made their way to the finish.....coming into the final 2 miles I had just passed into 7th place and that is where I would stay until the end. A finishing time of 4hrs 36mins....not exactly a day for a PR!. I have never been so pleased to see the finish line, I had somehow managed a 1hr 35min run, the 3rd fastest in the age group and had put myself in with a shot of a Kona slot should they begin rolling down!


[Sarah was so excited to see me come round the corner that my mum can be heard in the background hoping that I knew where I placed and not getting hopes up that I was close to the top 2 spots!....I knew I wasn't :-)]

Standing under the water hose at the finish was so good and after a day of many mixed emotions it was great to end up 7th Age Group and 40th Overall (last year I was 96th overall). Watching people come into the finish though, I have never seen so many people needing IVs or medical attention......this race course is usually tough but on Sunday the weather made it into a day that will be talked about for years.

After recovering and changing, it was time to see if the Kona slots would roll down! Last year the 2nd slot rolled down to 9th. Unfortunately the two slots available were taken by the first two in our age group and so there will be no visit to the Big Island for Team Banks in 2008! We'll be back to try for 2009.....the consolation prize was a slot at the 70.3M World Championships in Clearwater so we will be back down in Florida in November (and besides I have some unfinished business at that race after a poor run last year).

In other Eagleman news, ABRT teammate Kerri Robbins had an amazing race to win her age group. She declined the Kona slot however. Other races conflict with Kona for Kerri and when that race happens to be the World Duathlon Championships where she is reigning World Champion it is hugely understandable...and besides I am certain that Kerri will again win a chance to visit the Big Island!
Posted by Iain Banks at Tuesday, June 10, 2008

You had to contend with that crap with a stiff neck and back to boot?? DANG. You had a great race and someday YES...we will make it to the BIG ONE.