After a very leisurely week post-Eagleman I still wasn't ready for the 40km time trial and I was doing two of them only 15mins apart! Due to scheduling I was racing the individual at 9:44AM and then our 4-Man race was off at 11:02AM....and we only had 3 of the 4 men!

My neck and back were still sore from straining them the few days before Eagleman (I am investigating sports massages now!) and so I knew that with the recovery still on-going, it would be a hard race. Last year at this race I went under the hour in the individual but I knew that would be a tough ask on Saturday.

With a 9:44AM start time, it meant another early wake-up call for Team Banks and yet another trip over to Cambridge on the Eastern Shore of Maryland. The Church Creek Time Trial takes place on much of the same roads as Eagleman and this is only the 2nd of four races that I will be doing over there during the course of the summer.

From the get-go I wasn't really feeling it and the headwind on the first part of the course didn't help much. I managed to pass a couple of guys ahead of me but at about the half-way point the guy starting 30secs behind me passed and I did all I could to try and keep him within a reasonable distance. Fortunately the last 7 miles were with a tailwind and I could claw back some time lost on the first part of the course. Cranking it up on the last few miles was great but didn't get down under the hour and I finished just over in 1hr 1min 24secs.....we will have to work on that for August when the State Championships are on the same course! 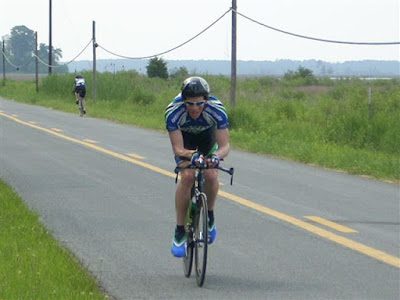 Just a mere 15minutes later I was again rushing to the start line with Steve and Lance for the start of the 4-Man TTT. To say that I wasn't exactly feeling like doing another 40km would be an understatement especially combined with the fact that Lance was fresh as a daisy and ready to hammer....as a saving grace Steve had also just finished his ITT! As expected Lance went off hammering and leaving us in his wake, he finally looked back and realized we weren't on his wheel and tapered back!

I just about managed to hang on around the course and limited my pulls, leaving Lance to drag us round! We did have Team Banks following us around the course like our own team car, Dad hanging out the window filming and Sarah doing the driving.....the only thing missing was someone shouting "faster, faster" out the window with a megaphone a la Johan Bruynell!

By the end everyone was hanging on as Lance's hamstrings were not used to the position of the borrowed time trial bike he was riding :-) Luckily we did all finish together, just over the hour and being the only team in the Cat 3/4 TTT we took home first place and the prize money....first prize money I have ever received so it wasn't all bad.

Although I was well and truly hammered after the two races, it is certainly a great workout as there are not many opportunities to get 80km of riding at a consistent 24MPH+.....hopefully by August I will be be back without the sore neck/back and on fresher legs!
Posted by Iain Banks at Monday, June 16, 2008

I saw you going to the start (after I had finished) and wondered who the guy with the Hincapie sunglasses was!