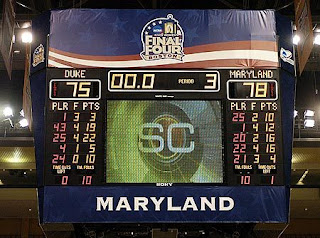 With the National Marathon coming up on March 29th, Sarah and I thought that we would get in some great relaxation (during a recovery week) by performing another marathon this coming Sunday. To be held at none other than the home of the 2006 Womens Basketball National Champions, the University of Maryland Terrapins, the NCAA womens 1st and 2nd Rounds take place on Sunday and Tuesday. (As background Sarah and I are huge Womens Terps fans and have been season ticket holders for the past four years since arriving in Maryland)

The 1st Round day on Sunday is particularly brutal as the schedule calls for four games in two sessions, the first game tipping off at 12pm and the last game ending at about midnight. Yep, 12 hours of Madness, four games and only a small break in between the 2nd and 3rd games (enough time for refueling and coffee!). Fortunately the 1st and 2nd Rounds were also held here back in 2005 and so we have been through it before and will be fully prepared for the big day.

In a stroke of genius (and in order to get the most revenue) the NCAA always manage to place a home team at the tourney venues and so we will get to see the #1 seeded Terps open a can of whoop-ass on #16 Coppin State (who ironically come from just up the road in Baltimore). We also get to see Nebraska take on Xavier, Duke take on Murray State and the Owls of Temple against Arizona State. Two days later on Tuesday we will get to see the 2nd Round games of the winners of those match-ups.

So what do you need to do to get prepared and make sure you can get through such a marathon day of MADNESS.....well here are some pointers:

2) Always pick a team to support if the Terps aren't playing.....there's nothing like cheering on Murray State to beat #3 Duke (boo-hiss).

3) Take a good pair of binoculars.....bench watching is always fun as is crowd watching.

4) Remember that the Mens tourney is also in full swing and so taking a radio and scheduling frequent breaks to watch the TV's in order to keep up with your bracket is recommended.

5) Choose your seat wisely....apart from the Terps game the crowd at the Comcast Center will be relatively sparse. Pick some seats where you can stretch, stand and not be impeded by others....

AND MOST IMPORTANT OF ALL GO TERPS!
Posted by Iain Banks at Friday, March 21, 2008