I didn't really know what to expect at Bunny Hop. As this is my first real full season of racing, I don't know many of the courses and just rely on what teammates recount to me. Generally I am not that well suited to criterium races, I don't have much of a kick, jump, sprint, whatever you want to call it, and so jumping out of corners is something I need to work on....how better to do it than on the soaking wet pavement of Suitland, Maryland.

I don't think anyone really likes to race in the rain, certainly not industrial park crits, and that obviously was felt at the start line with only 43 of the 80 riders turning up for the Cat 3/4 race. Fortunately, Steve had brought his tent along so we had a pretty good warm-up on the trainers, and Team Banks (back at full strength with Sarah and my parents) could stay dry during the race.

The race started out pretty fast and I was cruising around close to the back to get the feel of the race and the course. After about 20minutes I was feeling a bit more confident around the course, unfortunately by that time Kyle had been forced to drop out with a mechanical, and so we were down to three Latitude riders, myself, Steve and Mark. Moving up the field I was planning on trying to attack but it seemed that every time I was just about to go, someone went off the front and either the pack would surge or I would try to bridge.

All in all, despite the rain, the race was relatively uneventful, no crashes, nothing really sketchy in the bunch. It was with about 12 laps remaining that my race came alive. Two guys (Coppi and Bike Doctor) went off the front and after some hesitation I went off in pursuit and tried to bridge. I probably either went too late or didn't go hard enough to start with. For the next 8 laps I was off the front charging to get up to the front two. There was a good gap on the field and slowly I was bridging up....I probably got to within a few bike lengths but couldn't quite make the connection. 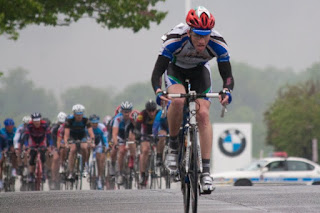 With 4 laps to go the bunch swallowed me, but the front two were hanging on for dear life....and hang on they did. The chase over the final two laps almost caught them and 1km further and the bunch would have got them. For me it was definitely a missed opportunity....if only I had tried to bridge sooner or pushed harder for the final few bike lengths, I could have been writing about a top 3 finish! It wasn't to be and will be a lesson for next time. At least I have the confidence that I can do things like that in races and have the strength to be active.
Posted by Iain Banks at Tuesday, May 05, 2009