This was probably my last 5km of the year and therefore the final chance to get under the elusive 17min barrier. I had gotten close in the past few attempts and knew that this was a relatively flat course. The weather on race morning was almost ideal....a cool 50 degrees and no wind. Milling about at the start it was good to see that the winner from the previous year was there and so I could have someone to pace with.

So at 9:00AM the gun went and as I always seem to do I took the front of the field and led them out of the park onto the streets. 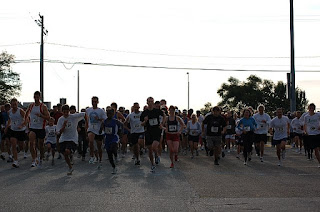 The course is pretty much an out and back with a short loop in the middle. I wasn't focused on anyone else in the first 1/2 mile and just concentrated on the pace and making sure that I didn't go out too hard. About 3/4 of a mile into the race I could only hear one set of footsteps behind me and without looking I sensed that it was last years winner....the battle was on.

Mile 1: 5mins 21secs (5km pace = 16mins 35secs) I was still in the lead and only had one other for company, the rest of the field was a good hundred meters or so back. Having competed in this race for the past few years I knew that the 2nd mile was the most difficult as it has the only noticeable hill. I was still leading the race and was feeling relatively good. I made a small surge on the hill to gain a few meters of space from 2nd place but the surge wasn't significant enough to get a clear gap.

Mile 2: 5mins 33secs (5km pace = 16mins 54secs) Coming past the 2 mile marker I was still leading and had just about 6mins and 1.1miles to get me under the 17mins finishing time. Now back on the main road, the guy behind in 2nd made a effort to take the front and unfortunately it was enough to get a few seconds on me...perhaps leading the first 2 miles had been a bit optimistic with someone pacing off me and doing no work.

Finish: For just under the next mile I was a) trying to catch up for first and b) trying to get under the 17minutes......I knew it would be close and coming back into the park you can see the finish line. With just 5 secs to spare I crossed the line for 16mins 55secs and 2nd place. First place was a mere 6 secs in front. 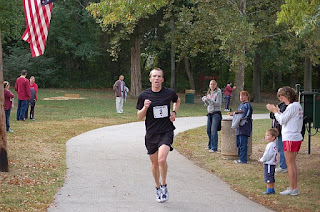 So the race was a success....I got under the 17min barrier and also managed to snag a $75 gift voucher for a Washington D.C. steakhouse. Not bad for 3.1miles of pain! 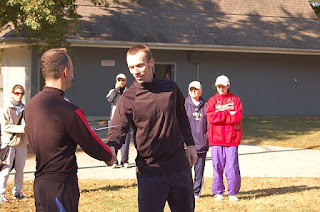 Next up is this weekend's Long Course Duathlon World Championships in Richmond, which take place on Sunday morning.
Posted by Iain Banks at Tuesday, October 16, 2007