This past weekend was the finale of the trifecta of races that I have done over the past three weeks. A week removed from my cold/virus etc, I was feeling better but not necessarily on top form. The Delaware Diamondman is a race that I have done for the past two years and was the first 1/2 Ironman triathlon that I did back in 2005. It's a cool race in that it comes towards the end of the "normal" season, I say normal as most people are beginning to end their seasons now. It is really only those who are doing the World Championships in Hawaii/Clearwater or IM Florida that are continuing on into October and November. For me it serves as a good training race prior to the WC in October and November.

Having done the race the past two years, we have got comfortable with the whole race layout and stay in the same hotel and eat at the same italian etc etc. Oddly enough every single time we have raced there, the University of Delaware have a home football game and so the town center is empty and everyone is at the game....good for getting a table on the veranda!

Race morning was surprisingly warm and the water temperature was 'convientently' at 78 degrees meaning that wetsuits were legal. 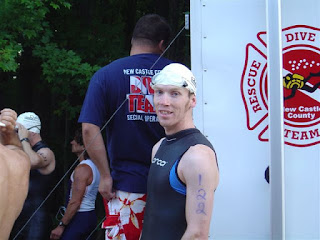 I don't know what it is about the swim at this race but I never do particularly well and came out of the water in a touch under 33 minutes.

It was then off for the 0.4 mile trek to transition. They even have a mini transition area where you can place shoes for the run up to T1, at this point I decided to take the wetsuit off and so once in T1 I wouldn't have to worry about it. 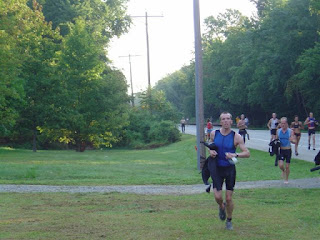 With the extended journey it makes the T1 a lengthy process and 4 minutes after getting out the water I was eventually onto the bike. 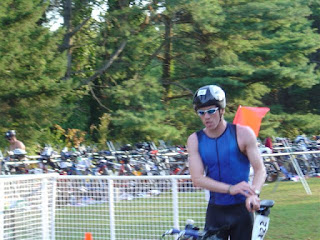 With having got my disc wheel only about three weeks ago I was looking forward to seeing how much of a difference it would make over a 56 mile bike leg. This was still only the 2nd time I had ridden the disc in anger but at least had some times from the previous years to compare with this year. Now here is my disclaimer.....the 56 mile bike leg one way or another was actually my longest bike ride since July 9th. For some reason I haven't been able to get any serious bike riding in over the last two months and have rarely gone over 2 hours. Anyway for the first 8 miles I felt good and was cruising along at 24MPH...this disc wheel is the Nutts I thought. 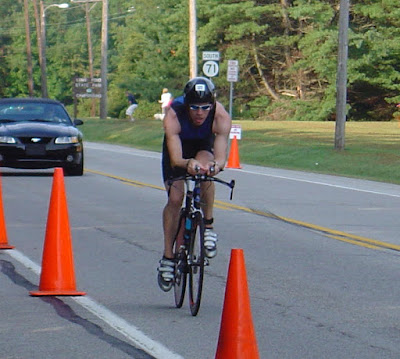 It was at about mile 20 just after the mile long climb over the Delaware River bridge that my power seemed to be waning and also my stomach decided to feel distinctly not right.....It was almost identical to last year in the same race that my stomach shut down on the bike and I could only take in water until part way through the run. It was definately a feeling of deja vu...what do they put in the Lums Pond water! The next 25 miles seemed to be a struggle and I felt as though I was certainly putting in more effort than I should be just to maintain a decent pace. During that period I was only taking on water rather than energy drink or Carbboom and I was hoping that once onto the run I would be able to refuel quickly.

Fortunately over the final 10 miles of the bike I was feeling more comfortable and could feel more power as the speed increased. My final bike split was 2hrs 24mins 52secs, a 23.2 MPH average and an improvement of 6 mins over last year at this race. I had planned to try and go under 4hrs 30mins at this race but with the run to come I needed to run the half-marathon in 1hr 26mins.....my previous best for a 1/2 iron run was 1hr 29min in May. 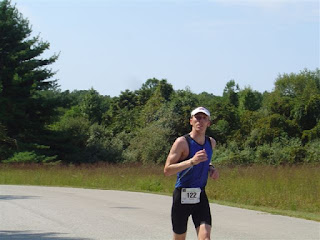 With that in mind I set off for the run knowing that a) I needed to refuel after taking on very little on the bike and b) I needed my best run split to get close to my goal. The run at Diamondman is always brutal as after the first 1.5 miles there is no shade or breeze until you come back to the finish. The majority of the run is along a gravel towpath of the Delaware Canal and isn't the best surface for a quick run split. I went through the first few miles at a good pace but the mileage markers seemed to be placed at "rough" intervals meaning that some miles were short and some long....at least there was an aid station at each mile. I was able to fuel with some Carbboom but was beginning to tire after probably having put too much into the bike leg. Through mile 6 I knew that 4hrs 30mins wasn't on the cards and so concentrated on dealing with the heat (92 degrees) and trying to reel in some of the people in front. Overall on the run I did 1hr 34mins, good enough for the 7th fastest run split and overtook five people in front after the bike leg.

My overall time was 4hrs 37mins, which put me in 9th place overall and 1st in age group. 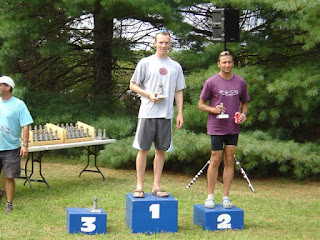 Although I am slightly disappointed with my overall time, it wasn't so bad what with the long T1 distance and the fact that the cold of the previous week really did take a lot out of me. I was also only 19mins behind the overall winner, which highlights that Diamondman never really gets super quick times. I know what I have to work on prior to the Duathlon World's and the 70.3M World's (longer bike rides at threshold) and I have two months before the 70.3M WC in Clearwater where I really want to end the season by going under 4hrs 30mins.
Posted by Iain Banks at Tuesday, September 11, 2007