This past Sunday, I took part in the North East Olympic triathlon, which starts off a busy few weeks in terms of racing. This coming Sunday I have a 15km running race and then on Sept 9th I have the Delaware Diamondman 1/2 Ironman triathlon. Anyway back to this past weekend. As stated in the previous post, I have just received my new disc wheel and so after a short bike ride with a full race setup on Saturday morning, we headed up I-95 for the relatively short drive to North East, MD. North East is a very small town on the Maryland/Delaware border and is surrounding by the North East River and the Elk Neck State Forest.

After a minor admin error upon signing in (they had me in the 25-29 AG rather than 30-34 AG), I noticed that the water temperature was stating 80 degrees....toasty to say the least! The USA triathlon rules state that if the water temperature is over 78 you can wear a wetsuit but will not be eligible for awards or national ranking points. Basically this means that if you are in contention for a high placing you don't wear a wetsuit. The referees noted that another water temperature would be taken on race morning, I wasn't holding my breath that the water would cool by 2 degrees overnight so had resigned myself to swimming without a wetsuit. This would be the first time in a race that I hadn't swum in one and it would be interesting to see how much of a difference it would make. It is a known fact that wetsuits significantly decrease swim times.

Saturday night followed the tried and tested pre-race protocol.
a)Find the hotel and check in.
b)Look through the yellow pages to find a italian restaurant.
c)Chill in front of the TV for an hour or so.
d)Make a brief tour of the local town (most towns only require a very brief tour)
e)Go to previously found italian restaurant and wonder why every small town has a good italian bistro.
f)Go back to hotel after finding a store for milk, OJ and muffin.
g)Early night at 10pm and set the alarm for 5:20am.

So the alarm went at 5:20am and before we knew it we were walking to transition and hearing over the speakers that the water temperature had actually increased overnight to a steamy 81 degrees. Definitely no wetsuit and now the decision to swim in my tri top or to attempt to put it on during T1. As most of us are aware putting a dry top onto a wet body doesn't work particularly well at the best of times let alone when the top is tight and you are trying to get onto your bike as quickly as possible.

My swim wave was the first of the day at 7:30am and already the temperatures and humidity were high. After plunging off the jetty, the whistle went and we swam off out in the luke warm North East River. 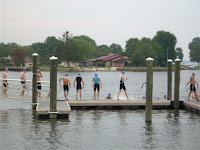 The swim did feel a little odd without the wetsuit and the tri-top although tight was dragging a bit. My swim time was 25mins 54secs (as opposed to a 22min 30 sec swim earlier in the year in a wetsuit over the same distance) and put me in 2nd place in my age group....there were nine people in front of me from the first wave. Now came the good part, seeing how the disc wheel would fare in a race situation.

I was quickly out of T1 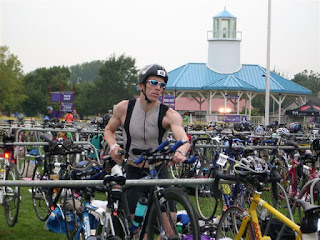 and out onto the roads in and around the Elk Neck State Forest. After about 2 miles I overtook the first place guy in my age-group and set about trying to catch some of the others in front. The course was quite challenging and was basically a series of rolling hills that never really enabled you to get into a rythmn. Along the flats though it felt as though the disc wheel was beneficial and providing that little bit extra. (With the Diamondman race coming up in 2 weeks time it should enable me to have a good guage as to the impact of the disc as I have times from the past two years to base the bike split on). Over the next hour I managed to bike my way up to 7th place and come into T2 after a 1 hour 3 min bike split for 22.5MPH average. Through T2 I overtook the guy in 6th and could see the five guys in front on the run course....I had 10km to catch them.

The run course was on some of the same rolling hills as the bike course and at the crest of the hills you could see everyone in front of you. To me that was a great motivator and I preceded to catch everyone in front of me except the leader. I had the best run I have ever had in an Olympic triathlon and clocked a 38mins 28secs 10km (6mins 12sec miles). 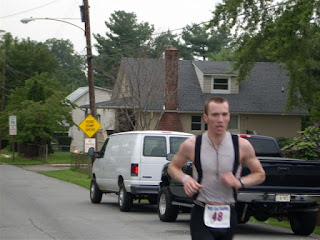 It was a great feeling to be chasing down the leader but in the end I just ran out of miles to get him back and finished less than 20 seconds behind. As the run was an out and back it was cool for people running out to be shouting that I could catch him and to keep it going. Although I guess I should say that just because I finished as the 2nd person over the line, the racers in the later waves could well beat my time and so knock me down the overall list some. With my fast 10km (it ended up being the 2nd fastest run split of the day), I finished in 2hours 10mins 40secs, which placed me first in my age group (by 5 mins) and put me 9th overall out of a total of 400. 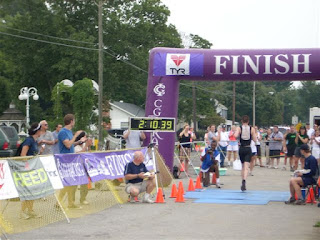 I have to say that this race was one of the best organized races that I have ever taken part in and everything went as scheduled and we didn't have to wait around for hours waiting for the results or the awards ceremony. From a racing point of view I have to say that my training appears to be paying off and that the training for the 50km really has helped my running strength and the speed is also coming back.
Posted by Iain Banks at Tuesday, August 28, 2007