Well first off apologies for not having posted in the last couple of weeks.....busy, busy, busy. On July 8th I did my first ever duathlon at the Blackwater Traverse. Shamelessly it was in search of gaining a place for the Long Course Duathlon World Championships that are taking place just down the road in Richmond, VA during October. Only three spots were being awarded to each age-group and so I knew that it would be tough to qualify.

The race was taking place in Cambridge (we all know that town by now!) and due to the predicted heat later in the day, the start was set for 7am. Feeling weird by not having to squeeze into my wetsuit, I was off in the first wave with all males under 39. Now this is where duathlon is different from triathlon, it was a 12km run first and this was hell for leather from the get-go. It was like doing a normal 10km race without any consideration that a 66km bike and another 8km was to come later. I started out well at a slightly less than comfortable 6mins per mile and even saw the professionals fly off into the distance at probably 5:30mins per mile. It was about the halfway point of the first run that my lack of recent speedwork caught up with me and with the heat and humidity my pace slowed slightly. I was pleased to come into transition after 45:50mins (6:10min/mile) and in 5th place in my age-group. 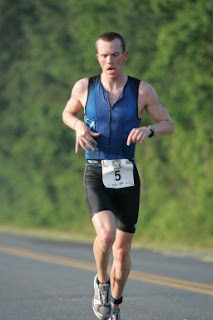 Onto the bike and time to replenish some fluids, as typically it is harder to drink on the run without getting most of it down your front. I quickly passed the 4th place guy in my age-group and set about trying to see where 3rd place was. The bike course was on similar roads to the Eagleman course, with little shade and fortunately little wind (although that would have cooled me down a bit). It was also a two-loop course with riders coming back through transition to begin the 2nd loop. Now this is where I and probably a few others got into problems. The course information had shown that a water bottle exchange would be at mile 10 of the bike and then again at the transition as we begun the 2nd loop. So I had been dutifully drinking expecting to pick up another bottle at mile 20.....as I come through to start the 2nd loop I see that there is no aid station! I now have to wait until mile 30 to get another bottle. Over the next 10 miles I had to ration the small amount of water than I did have left and hope that it wouldn't affect me too badly as the race continued. Unfortunately I didn't pass any other riders in my age-group during the bike and came into transition 2, in 4th place in age-group after a 1hr 48min bike split (23.4mph).

The second run was 8km and was completely without shade and the temperature was getting into the 80's even at 9am! However, this is where my longer distance running and triathlon training came into effect and I was able to pick off a number of runners ahead of me (as I passed I kept straining to see if they were in my age-group!). Although the second run was difficult, which is another difference in duathlon, the fact that you have already blasted your running legs during the first run, I was able to pace out at 6:50min per mile. One very cool thing about this race was that the finish was on the high school running track, with the last 300 meters being on the track. As I came into the stadium the crowd were going wild and the cheers of the fans brought me home.....I wish, in reality the track had a small section bleacher seats and the track had seen better days, probably in the 1970's. Team Banks were on hand however, to cheer me home.

Overall I was 15th in 3hrs 10mins and that put me in 4th place in age-group, just outside of the automatic qualifying spots for the World's. I now have to see if any spots get rolled down to me. The deadline for accepting the slots are this Thursday July 19th so we should know soon. The race was definitely a blast though and I think that I will have to try and get some more into my racing schedule....shall have to work on the running speed though (also in prep for the Fall 10km and 5km races).
Posted by Iain Banks at Wednesday, July 18, 2007